Be a Tourist at Home

For me, it's South Australia. While I'll be sharing my experiences here in SA with you, really I'm hoping to encourage you all to appreciate what you have on your doorstep, wherever it is you live. 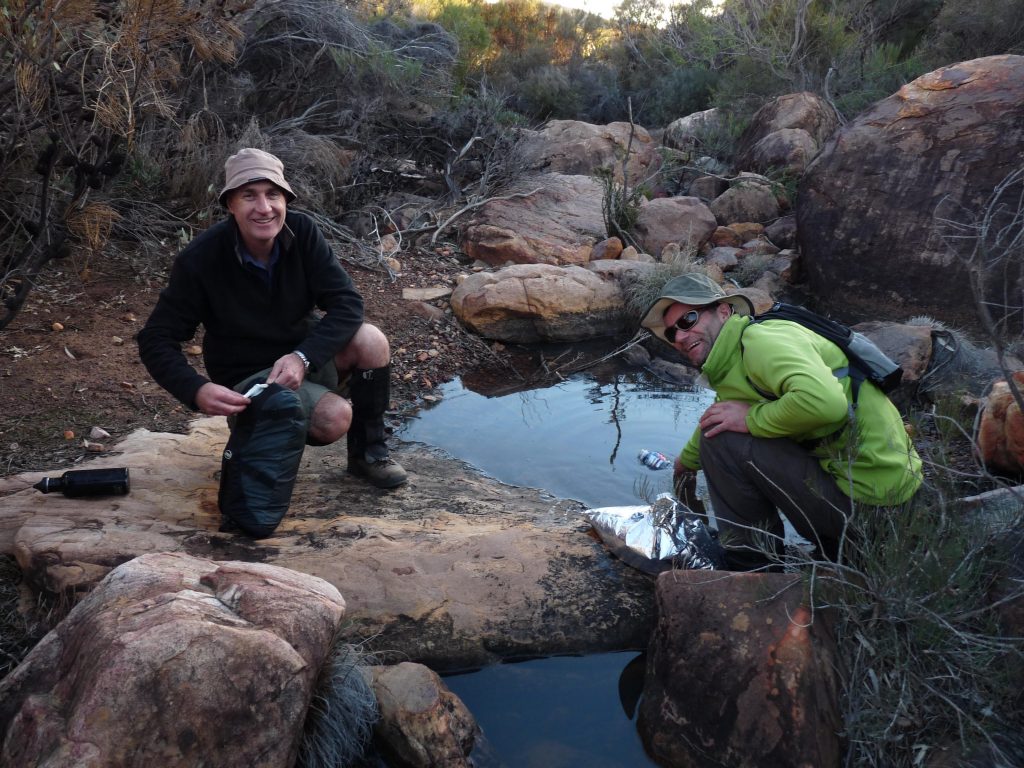 You mean there are no taps? Dean quickly got used to drinking (pure and clean) creek water

For me, it’s South Australia. While I’ll be sharing my experiences here in SA with you, really I’m hoping to encourage you all to appreciate what you have on your doorstep, wherever it is you live. 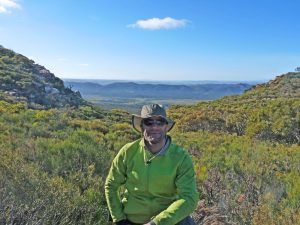 I’m going to start with telling you about our first visit to the Flinders Ranges and why it turned out to be one of my favourite destinations in SA, or anywhere for that matter.

I think it’s very important to make friends as soon as possible when you emigrate for obvious reasons. So what do you do? Talk to random strangers at the bar? Stop people in the street and introduce yourself? Whilst Adelaide is a very friendly city, I’m not sure either of those would be the best approach.

Joining an expat group will always be reasonably successful, you will inevitably meet people with whom you instantly have something in common and most of these will have had the same experiences as yourself when making the move so you’ve certainly got plenty to talk about.

We’ve made a great group of friends through joining an expat forum and it started with…. PomsinAdelaide .

We’ve been lucky to have met some awesome people and I think we’ll be friends for years to come. But I don’t think it’s a good idea to limit yourself to just expat forum’s, after all you’ve moved to the other side of the world… Embrace it!

So how do you meet other like-minded people? Well, what are your interests? What are your hobbies? How do you enjoy spending your spare-time?

Having always enjoyed getting out and about hiking, cycling and camping etc so we decided to join a club which focused on these type of activities. We found Adelaide Bushwalkers and it fit the bill perfectly… and then some! 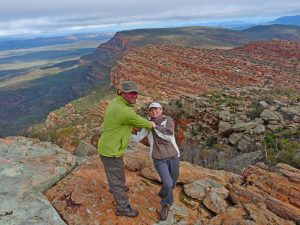 Dancing with Lesley on the rim of Wilpena Pound

After learning the basics at a beginners weekend in Kuitpo Forest (there’s more to bush walking than just walking y’know!) we put our names down for a trip to Wilpena Pound in the Flinders Ranges over the June Long Weekend.

A great thing about Adelaide Bushwalkers (ABW) is that new members have the opportunity to hire equipment (tent, backpack, stove etc) which means you get the chance to give the whole bush walking malarkey a try before you go out and spend your hard earned dollars on gear and then decide it’s not for you. Because it’s not for everyone, that’s for sure.

We had backpacks already (although we soon learned they weren’t exactly ideal to be carrying all day with 20kg of gear inside), we hired a tent and a camping stove, packed as best we could at the time and met the other club members at the bus station in Adelaide for a 6pm departure on the Friday evening. It’s about a 5 hour drive north from Adelaide to Wilpena Pound Resort which is where we were camping for the first night……

Waking up in the morning and tiredly poking my head out of the tent was a great experience for me. The dawn was breaking and the colours were beautiful. The rising sun had the outer walls of The Pound aglow with hues of red and orange and as I stepped out I heard a now familiar sound, although at the time I was a little bemused by these thuds on the ground. Three kangaroos hopped along close to me, explaining the noise and they stopped to give me the once over. Maybe just curious, they soon bounced away in the manner that only a kangaroo can!

This was probably my first encounter in the wild with kangaroos, and although I have seen them many times since (we even had to discourage one from climbing in our tent on one occasion) this one always sticks in my mind. Although when I told other members of our group that I’d seen some kangaroos they reacted the same way as if you told a Brit that you’d seen some sparrows.

After packing up our tent and having some breakfast we set off hiking into Wilpena Pound led by our trusted walk leader, John.

The scenery and landscape of the Flinders Ranges is pretty much as far removed from what I was familiar with in the UK as it gets. Maybe that’s why I was so fascinated with the area from the moment I first climbed out my tent that morning, but I believe that no matter where you have been or what you have experienced, you couldn’t fail to be impressed with this spectacular landscape.

It was hard work! Neither of us were really used to carrying a pack and I cringe now when I think of how heavy and unsuitable our gear was, but we had to start somewhere and over the last couple of years we have gradually been treating ourselves to lighter and smaller equipment more suitable for bush walking while carrying a pack. Surely not many other groups can sit around a campfire discussing how they’ve got their weight down to a personal best when they’re not even talking about their actual body weight but the gear they are carrying!

That day was a real adventure, something neither of us had experienced before and both of us were hooked from the start really. The tagline of ABW is ‘takes you places’ and it surely does.

There was no beaten track, but if there had been we certainly stayed off it.

When the decision was made to follow the kangaroo tracks until we found a clearing I remember commenting ‘well, now I know I’ve definitely arrived in Australia’. We didn’t walk as far as it felt we had that day but it was rather tough terrain and we were thankful for the odd break… And we were even more thankful when we stopped to set up camp for the evening and stop walking!

We had a good night that night, sitting around exchanging stories and learning more and more from experienced members of the club about what we can come to expect from being a qualified member of ABW.

A couple of things happened that evening which aren’t something you are particularly comfortable with when you’ve grown up in a small village in County Durham. One of them was lifting a rock while trying to find something to sit on, only to be confronted by a foot long centipede with orange legs and pincers which looked strong enough to snap my neck (it’s my story, I can exaggerate slightly if I feel it is warranted). The other was the scorpion crawling over my foot. I didn’t even pretend to be calm.

And, sleep. Which we did quite well that night.
Up and at ‘em. We woke early and even though we’d been warned, we were still surprised by how cold it was. I seem to remember it was 3 or 4 degrees when we made our morning coffee. I’d been berating my fellow walkers the previous evening about how they didn’t know the meaning of the word ‘cold’ when they’d lived in Australia all their lives. They seemed to enjoy seeing me shiver that morning!

And off we went, into the great unknown.Well, I didn’t know it anyway.

That was another good day. Hiking, scrambling, climbing, rock hopping, ducking and jumping as we took the path less travelled to some truly spectacular locations and viewpoints. There had been stronger than expected vegetation growth which made some routes practically impenetrable. But impenetrable is not a word that means anything to these guys and girls!

I felt like a child again, having an adventure. A real one! It was spectacular, I felt like I could stay there all week and no doubt I will do just that sometime in the not too distant future.

We spent one more night in Wilpena Pound, which obviously means it’s time for a manicure…

After another good night’s sleep and another cold morning we packed up our camp and made our way out of Wilpena Pound through Moonarie Gap, which was another adventure in itself. As we carefully made our way down the gap the views were amazing…

We survived! When we finally made it to the bottom, after some rest and relaxation and inspecting some ancient aboriginal art on a cave wall we made our way to the main road to await pickup by our bus. This half hour walk was flat, there was a path! It seemed boring in comparison to the previous two days.

Unfortunately for everybody else on the bus who’d had time for a quick shower or a wash back at Wilpena Pound Resort, we climbed onto the bus in a rather dishevelled state. We hadn’t really noticed but we were filthy from struggling through thick vegetation which was still covered in charcoal and residue from recent bushfires. And we were smelly….

The journey back to Adelaide was fun as us newer members of the club enthusiastically regaled each other with stories about how our particular hike was more demanding and exciting than the others. And the beers we bought at Hawker were particularly rewarding.

Some of the people I met that weekend I’ve never met again.

But a lot of them, I have. And not just met them again, we’ve actually become friends. And not just pretend friends, real ones! These are people who we spend time with, who we trust and who we feel we can rely upon.

So this is why I believe that the weekend we spent at Wilpena Pound in June of 2014 was a turning point in the process of making this move a successful one.