Where: Caroona Creek Conservation Park is on the western edge of the Olary Plain and around 6km E of Hallett on the
Barrier Highway. Tourilie Gorge is in the northern section of the park. This park was proclaimed on 18 February 2010.

Indigenous history: The Mount Bryan East Area had been occupied by the Aborigines for thousands of years and evidence of this occupation, such as grinding stones, hammers, axes and camp ovens, is still found in the area.

Habitat: This large park contains a number of habitats including: 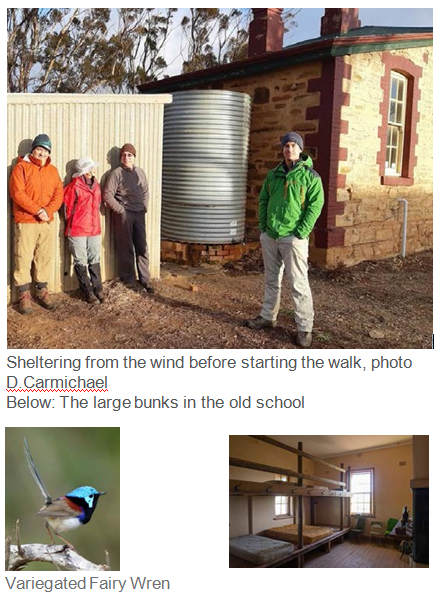 I can’t remember how long it had been since I had been on an overnight walk but I knew it was overdue and it was time to do another one. I had never been to Caroona Creek Conservation Park but the walk seemed within my fitness. I owned a great Macpac pack but the rest of my gear wasn’t really up to speed but I thought I would ‘crash through’. Bad idea. For example, I had a four person dome tent that packed up into a neat package and didn’t seem to weigh too much. Should have weighed it (like everything else) as it was probably 3-4 kgs.

On arriving at the meeting point of the old Mt Byran East school on Friday night I was filled with apprehension as there was a howling wind blowing and accompanying horizontal rain. Everyone else were regular overnight walkers except for Carlos who was a new member. They were all so organised and relaxed!

The next morning I watched as the others effortlessly swung their light packs on their backs. I need a two handed heeve-ho onto my knee and then my back. Oh well, it will all be over tomorrow afternoon, how bad could it be? Someone was making bacon sandwiches for everyone; some nice comfort food.

The rain had stopped but not the wind which had not subsided in intensity, but fortunately it was on our backs. Hmmm, seem to keeping up OK. The track was an easy walking graded track with steady inclines. The landscape reminded me of the Flinders Ranges as it was in an area bordering on the
arid zone right on Goyders line. Lots of salt bush, low mallee eucalypts and red dirt. Eventually we decended into Tourilie Gorge, a short but attractive section of rocky outcrops. 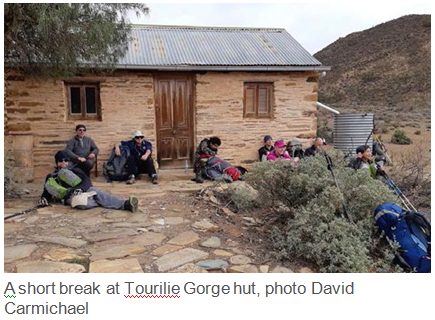 An interesting feature was the remnants of an old Cobb and Co road. Imagining a ‘stage coach’ powering through the gorge gave the view a
Western movie feel. The area was very dry although intererstingly around the old school house towards Mt Bryan East the landscape was a lot greener.

After a break at the Tourilie Gorge Hut we headed for a Heysen Trail shelter with a water tank for our water for the night and the next day. The fatigue was really setting in and I lagged behind as the unofficial ‘tail end Charlie’. I made sure I ‘fuelled up’ at the evenings campsite with a big meal hoping that would power me on the next day. However the following day was off track up and over the hills with a lot of loose rock and spinifex bushes to contend with. As the walk drew to a close and we made our way back along the tracks a cold wind sprang up and chilled me and I seriously wondered if I would need to be picked up by car. I was using a heavy branch as a substitute walking stick.

With some encouragement from Roxanne who lent me a real walking stick and walked with me I stumbled back to the cars. Once back at Burra and after a coffee I felt refreshed and promised myself to get back to regular bushwalking to stay in shape.