Envenomation First Aid
Reviewing The Pressure Immobilisation Technique
Garry Tretheway provides here a critical review of the use of compression bandages in the treatment of venomous bites. The opinions expressed are those of Garry. We would welcome some response to the article. 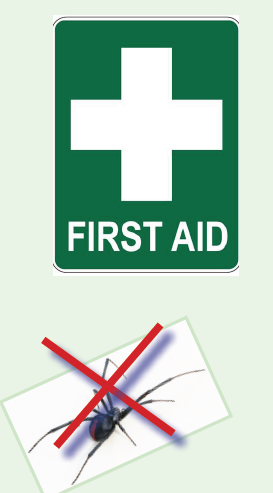 In Australia there are about 3,000 snake bites per year, resulting in about 500 hospital admissions (Weldon, 2017). Many receive antivenom; on average two per yearwill prove fatal. About half the deaths are due to bites from the brown snake; the rest mostly from tiger snake, taipan and death adder. While some deaths occur soon after the bite, it is uncommon to die within four hours of a snake bite.

Deaths from anaphylaxis following bee, hornet, tick or other arthopod bite happen as frequently as deaths from snake bite.

In 1906, the untreated death rates were as high as 40% to 50% for death adder and tiger snake bites! Improved supportive treatment and the availability of
effective antivenoms has reduced this considerably. 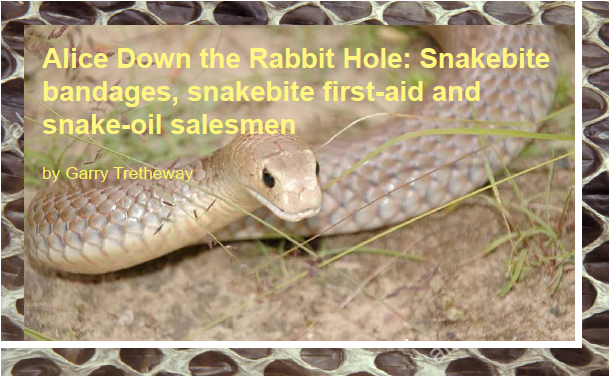 Over the last couple of years, I’ve noticed articles about Setopress and other ‘snakebite’ bandages in various magazines and on various websites concerned with bushwaking, 4WDing, gold panning, shooting, etc. And I’ve noticed that various claims are pretty much without foundation. Investigating further, I found myself down a rabbit hole of fiction dressed up as fact.
Here I do a serious disclaimer. While it’s easy to demonstrate that most commercial claims of efficacy are baseless, and some of the prominent medical recommendations conflict and are fairly baseless, it’s really difficult to find out what is actually the best way to do snakebite first-aid. So I’ll state here that I’m not recommending anything. Without better information, you probably won’t do better than follow the advice of the big-name government and non-government agencies. And even the dodgy commercial products are probably a bit better than nothing.
I was first drawn to an ad for ‘Setopress’. I’m going to hammer Setopress, not because it’s the worst, but ironically because it’s the best. It’s the only one that includes an actual product insert with instructions and numbers that can be checked. 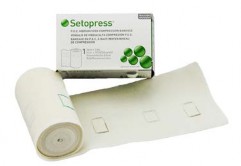 The Setopress product insert says it is for venous leg ulcers. It makes no mention of snakebite.
However, TacMed Australia does a promotional demonstration YouTube claiming great efficacy of Setopress for snakebite. Their ‘personality’ cites no relevant sources or qualifications and demonstrates ignorance, eg he confuses mmHg with mg of Hg. Independence Australia, another purveyor of Setopress, runs a page in which the ‘Descriptions’ tab quite rightly contains ‘management of venous leg ulcers’ and no mention of snakebite. However, in the ‘Reviews’ tab an anonymous person claiming to be a snake expert makes several unsupported claims recommending use for snakebite. I believe this is deliberate but deniable trickery. Other resellers make similar claims.

Two other competing brands, Aero and SMART both explicitly state they are used for snakebite. Other than nonspecific claims of “the right pressure”, neither offers any validation.
All three of these feature the same method of monitoring tension. Rectangles printed on the stretchy bandage become squares at the right tension. The problem here is that they all have a different ‘right tension’. I bought all three bandages for testing.
Hanging weights on these bandages, the Setopress rectangles become square with 0.75kg, Aero with 0.49kg, and SMART with 1.32kg. So SMART ‘right tension’ is 2.6 times that of Aero.

Another problem with ‘right tension’ is that the tension on the bandage seems to be taken to be a proxy for the resulting limb compression. It’s not. The diameter of the limb makes a big difference. For the same bandage stretch, different limb diameters result in different compression. Setopress applied as directed for venous ulcers, on my wrist, gives about 45mmHg. Above my knee, about 23mmHg, and at the top of my thigh, about 18mmHg.
Now, at this stage, I’ll say that most medical authorities tend to talk about required pressures being 55 – 70mmHg. So clearly the Setopress bandage only works for a snakebite on a skinny person’s wrist, or a child’s ankle. Aero won’t work at all. SMART seems better, but is problematic. It will apply useful pressure on bigger limbs, but if used on a small limb, it may well apply too much pressure, effectively forming a tourniquet. 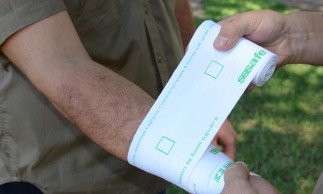 And there’s another problem with the 55 – 70mmHg. How was this pressure decided? Initially I thought this was a no-brainer – as tight as possible without cutting off blood supply.
But no. The lower limit of 55mmHg came from SK Sutherland, a snakebite expert, in 1979. He pioneered the pressure immobilisation technique, for which we are grateful. However, his methods left a lot to be desired. What he wanted to find out is, if you get bitten by a snake, and do / don’t use pressure immobilisation, how soon does venom turn up in your blood? Fair enough.
But instead of injecting venom into any vascular tissue, like a long fanged snake, or just under the skin, like a brown snake, he injected venom into the aponeurosis. Big word, but think of the hard silvery sheath on the outside of a muscle. And he used not people but small skinny monkeys weighing 2 – 2.6kg (a cat weighs 4kg), and found ‘firm crepe bandages’ effective. And to judge the pressure in mmHg resulting from the ‘firm crepe bandage’, he used human volunteers with ‘firm crepe bandage’ on one arm, and a kind of pressure cuff on the other, and judged when they were equal as being 55mmHg. (Remember, think of the difference in diameter of a human arm and a 2.5kg monkey’s leg.)
So the intuitively sensible 55mmHg seems to have been obtained by some convoluted guesswork, and then quoted by every article or advice we see nowadays.
And the upper limit of 70mmHg? That seems to be another magic number that has stuck and been rationalised in various ways. One authority explains it by saying that higher than 70mmHg cuts off circulation.
Another says that higher than 70mmHg makes tissue more permeable. Another recommends a pressure pad that must be a minimum of 70mmHg, as well as applying the compression bandage. As far as I can see, the two add up, forming a tourniquet.
And there are still further problems with applying the right tension. Who knows what 55mmHg looks like? I don’t.
So the common advice of ‘do the bandage as tight as for a sprained ankle’ is probably sensible. Or is it? Again, searching through the literature, I couldn’t find anything at all to say how tightly a sprained ankle should be bandaged.

What the literature does say, though, is that snake-bite first-aiders, both trained and untrained, almost never apply enough
pressure. Immediately after intense training they do better, but often still not tight enough, and they soon revert.
So I suppose full marks to the ‘rectangle stretched to square’ idea, which tries (but fails) to address the need.
The advice from the likes of St John, Melbourne University’s Faculty of Medicine, Survive First Aid or Australian Resuscitation Council seems clear enough, as long as you only read one. If you carefully read several, you’ll find a wealth of conflicting, therefore confusing advice. And purveyors of bandages and first aid kits are worse.
If you’re wondering about a clear recommendation, you’re on your own. But please re-read my second paragraph, the disclaimer. You’re still probably better doing something than nothing.