‘The Powderpuff!’ That was the name I gave to Mt Andre a few years ago after a club member advised me to avoid camping near its summit because of the all-invasive powdery soil that he apparently experienced there. Not long after, I first got to see the peak while looking east across Narrina Pound from Mt Tilley and its gentle skyline profile seemed to support the rebranding. Unfortunately, I overlooked the cliff along its northern side and this was to later make me pay for my insolence. 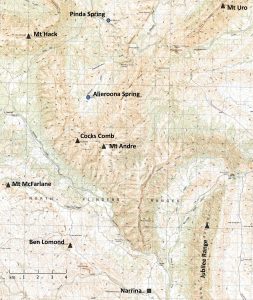 ‘The Powderpuff!’ That was the name I gave to Mt Andre a few years ago after a club member advised me to avoid camping near its summit because of the all-invasive powdery soil that he apparently experienced there. Not long after, I first got to see the peak while looking east across Narrina Pound from Mt Tilley and its gentle skyline profile seemed to support the rebranding. Unfortunately, I overlooked the cliff along its northern side and this was to later make me pay for my insolence.

In 2013, I approached Mt Andre directly from the north and despite my efforts to find a way past the cliff, eventually gave up due to the need get to water and to keep to a schedule. Two years later and again coming from the north, I rather carelessly set off from Alieroona Spring to approach it along its northern ridge but again with little consideration as to how I was to later deal with the cliff. Sloppy map reading and failure to consult my compass but instead take my bearings from a wrongly identified feature, unexpectedly brought me to the peak’s rugged ridgeline north of Cocks Comb. I was ‘miles’ from my goal and the day getting late, I again had to abandon the climb. I can only think that Andre was surely leering at me as I dropped down into Narrina Pound. Certainly from that point, I no longer thought of Andre as a powderpuff.

Two days later and following two nights of heavy rain, I returned to the fray but the day turned out to be long, successful and very memorable. I had camped a few hundred metres from the range and, the clouds now gone and the sky clear, I could see Mt Andre peeping over a shoulder of high ground. I set off early towards a prominent gully (Narrina 1:50,000, GR 933830) which would take me most of the way to the summit. That gully turned out to be a delight to ascend as it involved walking up a long series of rock platforms and steps with water flowing all the way, either exposed with small falls or sometimes hidden but often gurgling. With no vegetation to slow progress, it was a beautiful walk that I would otherwise have missed and I thought how my earlier failures now seem to have worked in my favour. I emerged from the gully only a short walk from the summit and stayed there an hour with the thought that Andre and I were now friends with all former insults and sneers forgotten. The day finished late with a long and energetic walk south along Andre’s spine to its terminal at Chambers Creek and I arrived back at the Narrina Shearer’s Quarters an hour after dark.

At 980m, Mt Andre is the central high point of an oddly shaped conjunction of ridges and low hills with its main ridge defining the eastern side of Narrina Pound. From Mt Andre, the high ground extends north for 7 km north to Main Gap with Mt Hack opposite and south for 4 km to where it butts onto a scimitar shaped ridge. From the junction, that ridge runs both south (the route I had taken back to Narrina) and NE before curving to the south and dropping into Bullock Head Gap to face the northern end of the Jubilee Range. From east of Andre’s summit, a line of hills extends NE for 9 km towards the Mt Uro Range but separated from it by Waukawoodna Gap. In all, the whole of Mt Andre’s ridgelines and hills is confined to a surprisingly compact area of only 15 kilometers square or so.

Mt Andre and its surroundings offer a lot of good walking but despite this, appears to be rarely visited by bushwalkers according to the owner of Narrina Station. This seems a pity and certainly I have found the local property owners to be very welcoming to walkers and I hope to return again one day.