In late March this year Trevor Jones and Bruce Hood undertook a 13 day walk and paddle in an attempt to get to Vanishing Falls, in the SW National Park in Tasmania.

The falls are very remote and surrounded by dense scrub, requiring at least 3 days hard work to reach from the nearest track. There are several options on getting to the falls, we chose the, ‘in theory’ least scrub approach, coming in from New River and exiting the same way. To do this, on top of our 13-day pack, we each carried a pack-raft and paddle. Adding about 2.5kg to the pack weight. 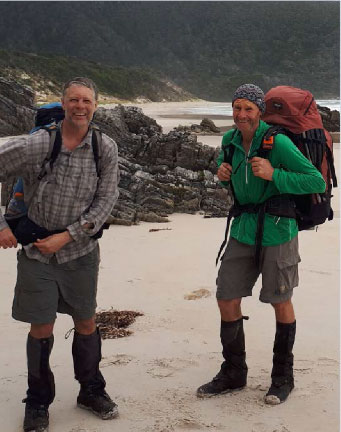 Setting off on New River Lagoon

Day 1 – After our flight the previous day was cancelled due to poor weather, we took off the next day from Hobart, in equally poor weather, but the pilot managed to get us through low cloud and showers around the coast to Melaleuca. We started walking at 12.30pm in light rain – would the weather improve? Short answer – no …
An easy 16.5km walk down to and along Cox’s Bight. 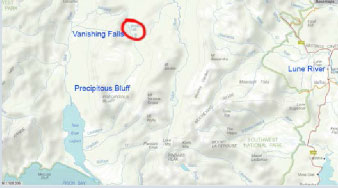 Day 2 – A warm up day with a 900m climb up onto the Ironbound Range. We camped on top which was quite chilly. A 20km day, with good track and not too much rain.

Day 3 – Coming down from the Ironbound’s was a slippery and knee challenging task and Bruce’s leg (which was still recovering from an injury 5 weeks prior) gave him some grief, and we had some discussion on abandoning the attempt at Vanishing Falls, or I going on alone. Rather than starting on New River Lagoon that day we decided to head for the campsite at Prion Boat crossing. A 16km day, some rain some sun.

Day 4 – Fortunately Bruce woke with his leg quite a lot better, and with just a paddle to Cavern camp planned for the day, decided to persevere. It was great to be off in the packrafts!

Initially it was pretty calm but we soon had a significant headwind, showers and swell to battle. Normally (that is based on a single other trip report ) about a 3hr paddle, it took us 4.5hrs. Walking along the edge of the lagoon was not really an option either with the lagoon level quite high. After a 6.5km paddle and a chance to relax at Cavern camp we set off for VF.

Day 5 – We left our unneeded food/gear hanging from trees at Cavern camp and set off. We had quite a stiff NW headwind getting the couple of kms to the mouth of New River, but then it was nice paddling for about 2.5km up the river. However the opposing current continued to increase (maybe 2km/hr with us paddling at 2.5 or 3km/hr) so after stopping for a break we decided to pack up the rafts and try the forest/scrub. At times this was ok, and at times slower than paddling; especially when we became navigationally challenged by a significant side creek (ie we went the wrong direction for about 1km!). Distance covered in a tough day – about 7km (700m / hr). Quite a few showers. 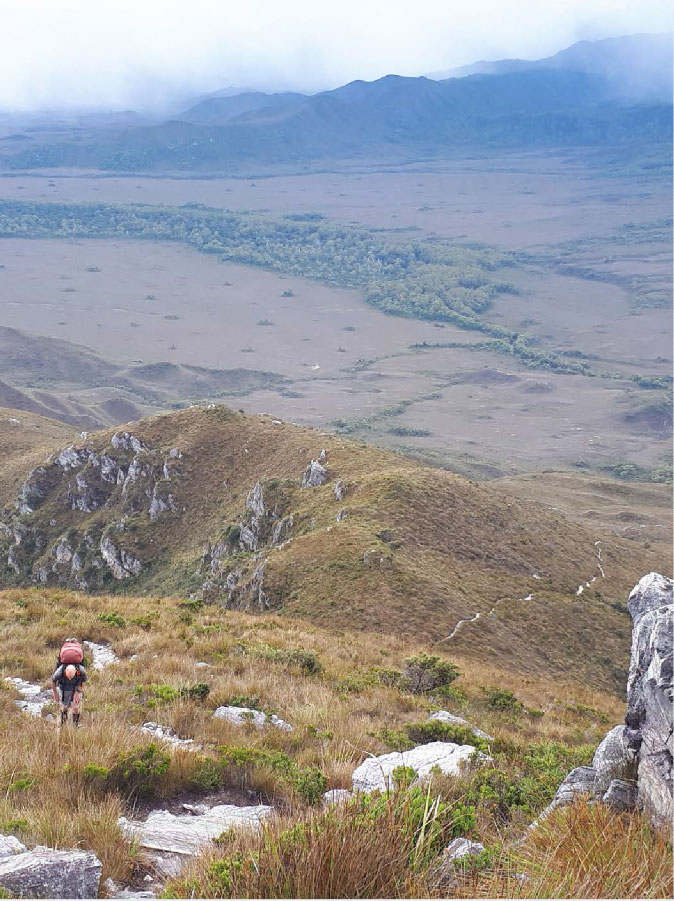 Bruce – climbing up on to the Ironbound Range.

Day 6 – Cold and wet. Difficult walking in scrub up beside New River to the junction with the Salisbury river. Used packrafts to get across New River and managed to paddle a couple of slower pools up the Salisbury, carrying rafts past rapids.

We packed up the rafts and entered the forest – with thick vegetation we only managed 100m in 1 hour and battled back to the side of the river. After a while we chose to leave the rafts tied to a fallen tree. It was slippery, difficult, and very cold walking in and near the rivers edge. Sometimes slipping and being floated by our backpack while grabbing for handholds. We camped only a couple of kms up the Salisbury. Set-up in the rain, and cooked in tents. Maybe 7km covered for the day.

Day 8 – Cold and wet … We had now used up our ‘rest/spare’ day and also the day trip planned for climbing Precipitous Bluff. But assuming we would get back quicker than coming, we pressed on for a final attempt to get to VF.

The rising river level was making it increasingly difficult to cross or walk beside. We were often walking on fallen vegetation, in various states of decay, often 1m+ above ‘ground’ level, and regularly slipping off (or through) tree trunks, with our legs battered and bruised.

A fall through rotting vegetation to ground level a common occurrence … 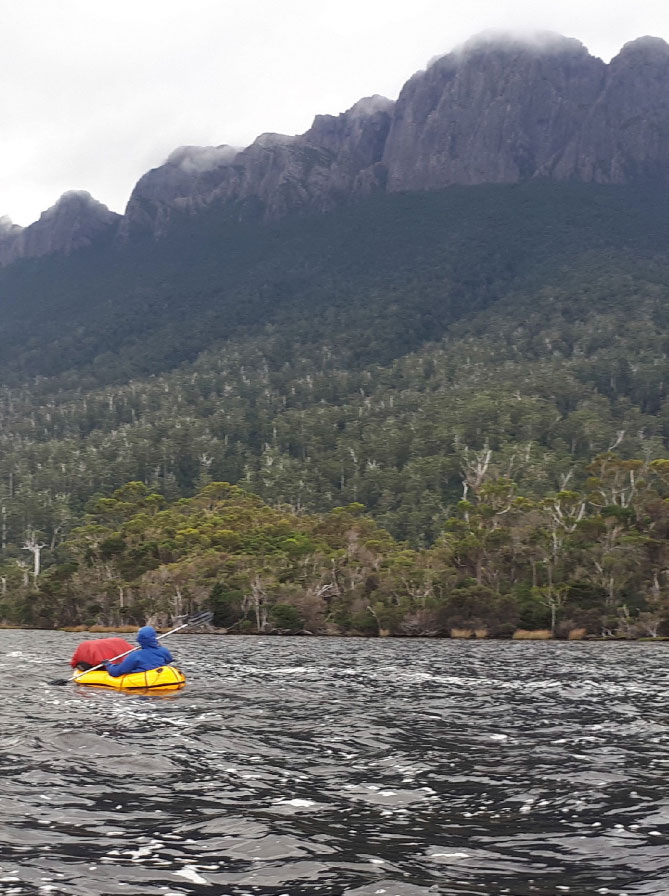 We got to about 3km from VF. The last 2km to the falls are normally a dry river bed with the river underground. But looking at the river we expect it would have been flowing and decide we had to turn back – just no more time left. We only got a couple of kms beyond last night’s camp, heading back down the river – which was now too high to cross or go beside. A miserable day – finally admitting failure to get to VF. Where there were rocks they were treacherously slippery to walk on.

Day 9 – Cold and wet … The river was too high to cross, we were on the south side of the river, and we had left our packrafts on the north side – no choice but to battle thru the scrub, occasionally trying the river for somewhere to cross. After a couple of aborted attempts we finally made a crossing and down to find the rafts about 4:45pm. We decided to celebrate with a bit of paddling before looking for somewhere to camp.

Neither of us had done any solo paddling in rapids before – but where better to learn than in the remote Tassie wilderness!

Coming down our first rapid my paddle came apart and I lost 40% of it – this was at the joint where I had deformed it using it as a walking stick … fortunately Bruce spotted it caught near the rivers edge, and I managed to negotiate the rapid with half a paddle and recover it. After some great repair work by Bruce we continued on for another couple of rapids before finding a spot for the night just before the junction with New River.

I bent my paddle trying to get free from a rock on one rapid – another repair job taping a couple of tent pegs to it.

Day 10 – Sunny and calm! Finally, a nice day. Where was this when we needed it earlier …

We had a fun (if nervous) day paddling down New River, with plenty of rapids to negotiate as well as many submerged, and partly submerged trees. We came to one section of about 400m of log jams where we carried our rafts through the forest. The rafts held up really well – taking a battering on rocks and branches without any punctures.

We got to Cavern camp for a late lunch – having covered about 14km in 5hrs – a nice change from battling thru scrub! And after lunch decided to paddle on to Prion campsite while we had a tail wind.

On arriving at Prion, we hang out our wet things – basically every item in our packs …

We covered about 20km this day – all by raft – with the help of a fast-flowing river.

Day 11,12,13 Back on the beautiful South Coast track – we really appreciated having a track (and bridges!) – even if it was muddy. Out to Cockle Ck, back to Hobart and a hot shower. Yah.

Enough challenge for a while I think.

On our last day we met a solo walker coming in – Andy Szollsi, who was just starting out on his little 88- day walk! He has pre-placed 9 food drops. Walking some of the toughest walks in Tassie: PB, Arthurs Traverse, Eldon Range, Frankland Range and others! Carrying about 32.5kg. In the Tassie winter! Finishing early July.

Well that humbled us.

Will we try for VF again? Maybe!

P.S. Ask Bruce about the small 35mm splinter he smuggled back into SA!