This report describes my eight day walk in the Sequoia National Park, California as well as how to get there as a solo traveller. The attraction of the park is that it is the home of the giant Sequoias trees which I have wanted to see for a long time, has a wide variety of walking trails that connect with long distance walking trails like the Pacific Crest Trail, John Muir Trail and the High Sierra Trail and is easily accessible from Los Angeles or San Francisco. 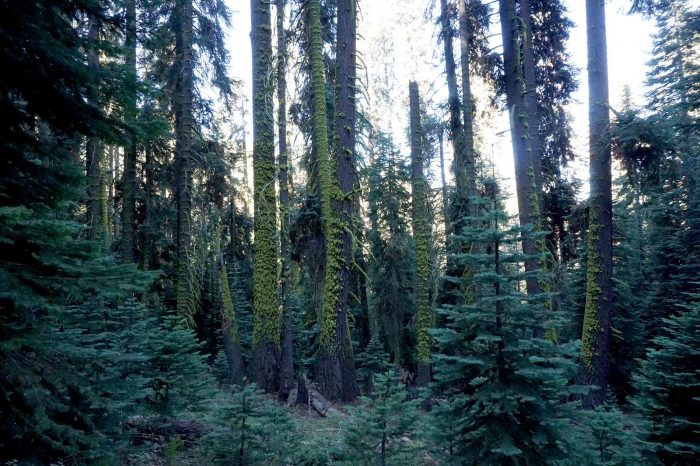 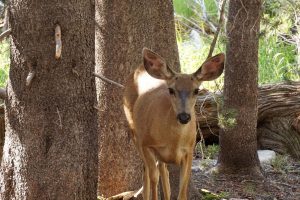 This report describes my eight day walk in the Sequoia National Park, California as well as how to get there as a solo traveller. The attraction of the park is that it is the home of the giant Sequoias trees which I have wanted to see for a long time, has a wide variety of walking trails that connect with long distance walking trails like the Pacific Crest Trail, John Muir Trail and the High Sierra Trail and is easily accessible from Los Angeles or San Francisco.

Prior to departure I booked a camp site at Lodgepole in the park US$22 (for up to six people). Lodgepole is a campground accessible by road, has a store and café in addition to a park office. Most importantly you can walk from here to connect with a number of trails. Think of it as something three times the size of Wilpena with similar facilities.

In addition, I acquired my wilderness permit US$10 plus $5 per person. Wilderness permits need to be booked promptly on March 1st by fax as demand can outstrip supply for some areas. While you can walk up to the office to get one, they pre-book 60%, you can wait in line for hours it seems for the other 40%. You can also hire Bear canisters (US$17 for 8 days) for securing your food at Lodgepole. The website discusses it all.

My flight left Adelaide at 7am on a Tuesday morning and arrived In Los Angeles at 7am Tuesday after morning forty five minutes ahead of schedule. By 8am I am on the Flyaway Bus for Union Station US$18 return. This ride, despite warnings about LA traffic was just under 40 minutes and it was then a 10 minute taxi ride to the Greyhound bus station arriving at 9am, US$10. My bus is at 12.15pm and the storage lockers are not big enough for my bag so I am stuck here for three hours. I have pre-booked my ticket, US$33 return to Visalia.

It is a five hour bus ride to the town of Visalia where I stayed for two nights and then another night at the end of my walk. This totals 26 hours solid travel from my home to the hotel in Visalia. I only did this because I am able to sleep for a few hours on aircraft. Visalia appears to be about the same size as Ballarat, it is a large country town. I stayed at the Visalia Comfort Suites US$88 if booked well in advance.

This hotel was a two minute walk from the bus stop for the Sequoia Shuttle bus service which departed from over the road and was about a 15 minute walk from a local Walmart where I got all my supplies for the walk. They are also happy to store luggage so very convenient all in all. It is also located by the Visalia ‘Downtown’ area which has some nice wine bars and craft ale bars which took care of the jet lag.

The main reason for choosing Visalia is that it operates the Sequoia Shuttle as well as being on the Greyhound bus route. This bus service gets you to Lodgepole in three hours US$15 return, the fee includes park entry. It also operates a free shuttle service within the park, taking you to the big trees and trailheads.

I caught the 8am shuttle bus to the Big Trees Museum and stayed on the same bus to get to Lodgepole for 11 am. I check out the facilities and get into my campsite at 12pm. I get my wilderness permit and bear canister for the next day at 1pm, the earliest permitted. I crammed my freeze dried food etc into the bear canister and spend the afternoon visiting the giant trees and checking out the trailheads. 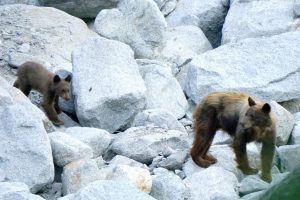 “…large mother Black Bear came down to the creek with two cubs for a drink. She stood at about 6-8 feet high, three times my width and was bellowing loudly”

After an early night, I am on the trail at 7am and after 2km of walking along a disused 4WD track I get to the Wolverton trailhead; one of the starting points of the High Sierra Trail. I have a steady two hour climb up through the moist pine forest to Panther Gap at 2600m. From the gap below Panther Peak you get fantastic views up and down the forest of the Kaweah Valley and the peaks of the Great Western Divide. I then descend for 3.5km to the High Sierra Trail that makes its way along the side of the granite walls of the valley. After five hours walking I decide to camp at the Buck Ck campsite and chat with other hikers. At about 6pm a large mother Black Bear came down to the creek with two cubs for a drink. She stood at about 6-8 feet high, three times my width and was bellowing loudly, I remind myself they are more scared of humans than we are of them…An eventful end to my first day on the trail.

The next day I climb up to Bearpaw Meadow, down to Pine Ck that has carved a deep chasm through the granite and up to Hamilton Lakes. This takes four hours but I still camp there as it deserves its reputation as a beautiful spot, a blue lake surrounded by granite peaks. One of the peaks, Valhalla is interestingly eroded and dominates the skyline for a lot of the walk. There are only a dozen campsites or so and they are taken by early afternoon as the lake is a popular swimming spot. Deer and squirrels wander through the camp. 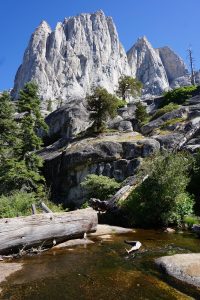 “One of the peaks, Valhalla is interestingly eroded and dominates the skyline for a lot of the walk…”

A big day follows with a climb from 2500 to 3200, from the lake up to Precipice Lake and then on to Kaweah Gap, one of the passes over the Great Western Divide. I notice myself puffing as the oxygen begins to thin out. After a couple of hours I make it to Precipice Lake, a very beautiful lake up against a sheer cliff below the peaks. The gap consists of a series of small meadows with a creek flowing through it and when you get to the top you look out onto the Nine Lakes Basin, Kaweah Range and the Big Arroyo (Spanish for gully). Marmots hop about nearby. My camp is down in the pine forest by the creek that flows through the arroyo 5km away. I camp with the other walkers at 2900m and though this was not my highest camp it was the coldest, the only night I need my beanie and down jacket. The temperature went down to 2C overnight. The altitude of the Sierra Nevada means there is always water around from the snow and glacier melt despite it being the middle of summer and dry and dusty. 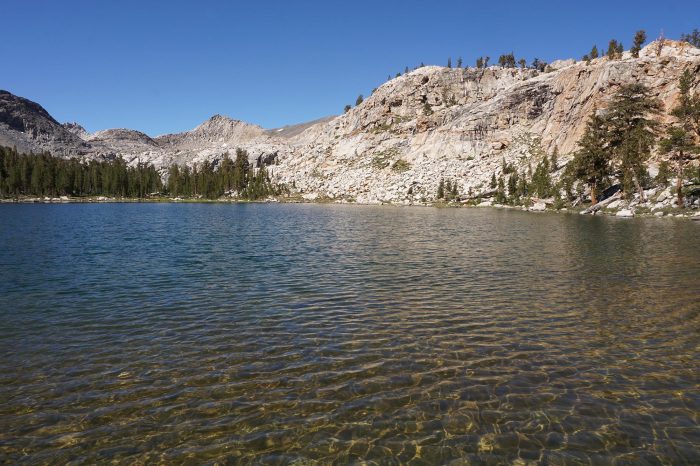 My fourth day sees me leave the High Sierra Trail as I climb up to the Little Five Lakes at 3200m. It is only a two hour walk to the campsite over 5km. As you climb you come to the first lakes surrounded by pines, cliffs and hills. You look back over the Kaweah Range on the other side of the Big Arroyo. I pitch my tent and secure my food in the bear box. There is only one other tent nearby. I take my lunch and spend the afternoon exploring the Big Five Lakes that sit behind a small range of hills about 5km away. As the sun goes down the ranges and pines are reflected in the still water of the lakes and I wander around taking dozens of photos.

Stream through the Big Arroyo

From Little Five Lakes I have a two hour walk up to the Black Rock Pass at 3500m, an altitude gain of 300m with a bit of huffing and puffing. Possibly the best views of the walk I am on the ridge of the Great Western Divide. I am looking at some 3700m peaks like Mt Sawtooth and Mt Eisen and their adjacent lakes and my camp in the valley below a 1300m descent. Looking back I am above the range that separates Little Five Lakes from Big Five Lakes, I see the Big Arroyo and the Kaweah Range. Further afield the Kaweah Valley and a distinct line of haze towards the plains caused by the huge ongoing bushfires to the north and the south. Marmot and Pika (hamster?) run around. It is another nine km down to my camp in the valley and once again I am camping in the thick forest with just two other couples.

My sixth day and I have 12km back to Bearpaw Meadow to close the loop on my walk. I descend 500m over 6km to the Kaweah River and then climb 700m over 6km to Bearpaw Meadow. I walk through pine and oak forest. Bearpaw Meadow has fantastic views of the range and valley. There is an historic private tourist concession here that runs a ‘glamping’ operation at US$350 a night in canvas tents. The important thing to know is that they sell cold beer and wine to passers by…they fail to warn me that Dudes Double Hop IPA comes in at 9% alcohol and I take a well deserved afternoon nap.

I stay the next day at Bearpaw Meadow as I had overestimated how long it would take me to do the loop. I take my lunch on the trails toward Elizabeth Pass and Deadman Canyon. I get great views looking down on the trails toward Hamilton Lakes that I had walked a week earlier. I have my lunch looking out along the Great Western Divide and the Kaweah Valley where I can see Kaweah Gap and Black Rock Pass the two passes I had climbed.

My last day of walking I head back to Panther Gap. I camp here because I wasn’t quick enough to book a site for Lodgepole and it is the nearest you can camp to the trailhead. It is no big deal as my bus back to Visalia is not until 2.30pm and it is only 90 minutes downhill from the Gap to Lodgepole. I am camped there by lunch time and walk toward Panther Peak taking photos.
In conclusion I highly recommend this park as a walking destination. The mountains and valleys are incredibly scenic. The wildlife like bear, deer, marmot and squirrels are easily spotted and the trails are very well maintained and signposted. The trailheads are readily accessible by public transport.