Because of my great fondness for bushwalking in Tasmania, and because of my overall love of the island, I have always relished in the photography of Olegas Truchanas and Peter Dombrovskis. I began walking in Tasmania when I was twelve in 1946 whilst living in Hobart, and after leaving to come back to Adelaide in 1952, I have been back 23 times. I went walking on most of those return trips, and I have had the good fortune to complete most of the popular walks and some remote walks there. Thus I can relate to many of the areas Olegas and Peter photographed. I hope newer members of ABW will benefit from the following information on two legendary figures of wilderness Tasmania.

Olegas Truchanas was born in Lithuania in 1923 and arrived in Tasmania in 1948, and already had an impressive knowledge of photography. He quickly realised that very little was known about the huge wilderness that was South West Tasmania. Ten years later, his name was known to conservationists, bushwalkers, photographers, canoeists and yachtsmen. He had discovered that few Tasmanians knew much about the South -West, and fewer cared about its future. On many of his trips to the South-West, he travelled alone, giving him the opportunity with his artistic insight to evaluate and appreciate all that surrounded him.

Olagas designed his own kayak for his historic trips to the Franklin and Gordon Rivers, and his name will forever be associated with this wilderness area. As well as the Gordon-Franklin area, he became vitally involved in the very beautiful and isolated Lake Pedder. His walks in to and flights over the lake gave him the opportunity to amass many now famous photos of the lake with its pristine landscape and beach.

Tragically, for the lake and the conservation movement, the Tasmanian Government decided to continue hydroelectric development including the building of the Gordon River dam and two other dams which would result in the flooding of Lake Pedder. In spite of the huge efforts on the part of Olegas, the conservation movement, and a large number of Tasmanian people, the project went ahead, Lake Pedder was flooded in 1972 and the large impounded Lake Pedder that many club members know was created.

The Lower Gordon River Power Development Scheme would be the next threat to the great beauty of the South- West. This scheme never went ahead. In January 1972, he again set off to his beloved Gordon River, but things went wrong and he drowned in the river. His companion who had driven Olegas to the launching place was able to raise the alarm, and three days later, his body was found by the search party. 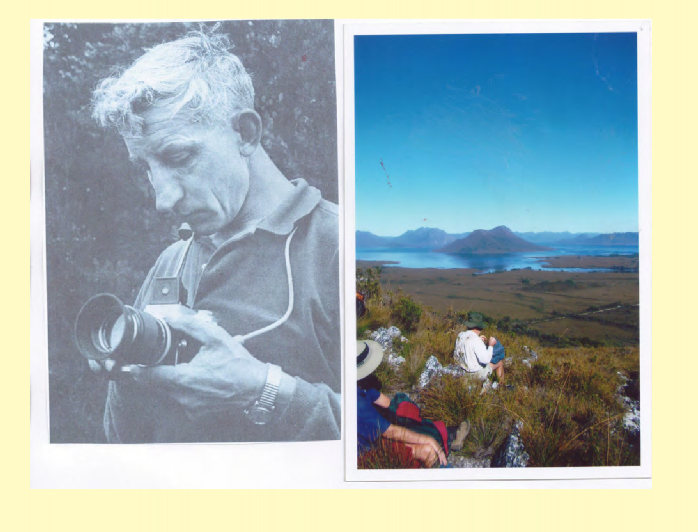 Left: Olegas Truchanas Right: The flooded Lake Pedder. Taken by Frank Hall on a trip in 2009 from the slopes of Mount Anne. John Bartlett is the person in centre of picture.

In the search party was a young Peter Dombovskis whom Olegas had taught canoeing and the use of a camera. It was Peter who saw the body of Olegas Truchanas first. Most of Olegas’s early photographs were lost when his house was destroyed in a bushfire in 1967. However, over the next five years, he substantially rebuilt his collection of photos of the Lake Pedder area.

Peter Dombrovskis was born in Germany in 1945, and migrated to Australia in 1950. He became the protege of activist and photographer Olegas Truchanas. Peter became well known through his Tasmanian Wilderness Society calenders as well as his 1983 book Wild Rivers coauthored with Bob Brown. This book was an example of his skill in photographing the Gordon and Franklin Rivers.

The legacies left by Truchanas and backed up by Dombrovskis are huge. Truchanas had lived to see the failure of the Lake Pedder and Pieman River campaigns, but then turned his attention to the Gordon and Franklin Rivers, and later on, Dombrovskis was involved in the massive campaign in having the Franklin Dam abondoned.

In the 1990’s, there was a Federal Government inquiry into the draining of Lake Pedder. The key findings of this enquiry dictated that for several reasons, it was inappropriate to go ahead with the draining. A lesson to be learnt from the Lake Pedder and Gordon/Franklin issues is that, in future, greater weight must be given to the preservation of environmental and scientific diversity when considering exploiting pristine areas.

Footnotes: Olegas Truchanas had three children, and they appear as youngsters in several of his Lake Pedder photos. On a walk in the Central Highlands sometime in the late 1980’s or early 1990’s, our group from ABW met his daughter Rima, and at the time, she was involved in promoting “Minimum Inpact Bushwalking” in Tasmania. I see from her website she is an acupuncturist in Castlemaine, Victoria.

To see many of the images by Truchanas and Dombrovskis, just look on Google.