Roger on a rock pinnacle above Lake Pedder

John Bartlett asked if I could provide some notes on a trip I did to Tasmania in my early years, with a special mention of Lake Pedder, to complement his article about the wilderness photographers Olegas Truchanas and Peter Dombrovskis. Both these remarkable men died well before their time while taking part in the activities they were passionate about.

Many of you would have seen Bob Mossel’s presentation to the club about a year ago of the expedition he and his brother did with three young women in 1973 in walking across Australia from the top of Spencer Gulf to the Gulf of Carpentaria in 124 days. Bob was a keen member of ABW for some years. He held a pilot’s licence for light aircraft and took members on flying trips to remote and spectacular areas. When he announced a 10 day flying trip to Tasmania (Adelaide to Adelaide) my wife Anne-Marie and I and one other jumped at the chance. This trip was in February 1972: we had only been married 7 months after meeting through ABW – she was 21 and remained a full member of ABW until our sons were born. With four of us in a 4-seater Cessna we had to pack extremely lightly and any actual bushwalking would be confined to short walks.

Our significant landing spots were on King Island and Flinders Island in Bass Strait, Cox Bight (tricky, not permitted now), Melaleuca (did a boat trip with Dennis King while there as he ferried a party of bushwalkers to their starting point), a small island off the NE tip of Tasmania (very bumpy landing and take-off and the strip had been closed for some time, so the only man on the island, the lighthouse keeper, informed us), Lake Pedder and Maria Island.

I had already had a delicious tastes of Tasmania with a walk through Cradle Mountain- Lake St Clair NP in Dec 1966- Jan 1967 with ascents of several peaks and a side trip to the Labyrinth. Then in Dec 1968-Jan 1969 over the high level route to Precipitous Bluff with return along the South Coast Track – this was a 10-day walk led by Peter Beer with his wife Alison, myself and two others. 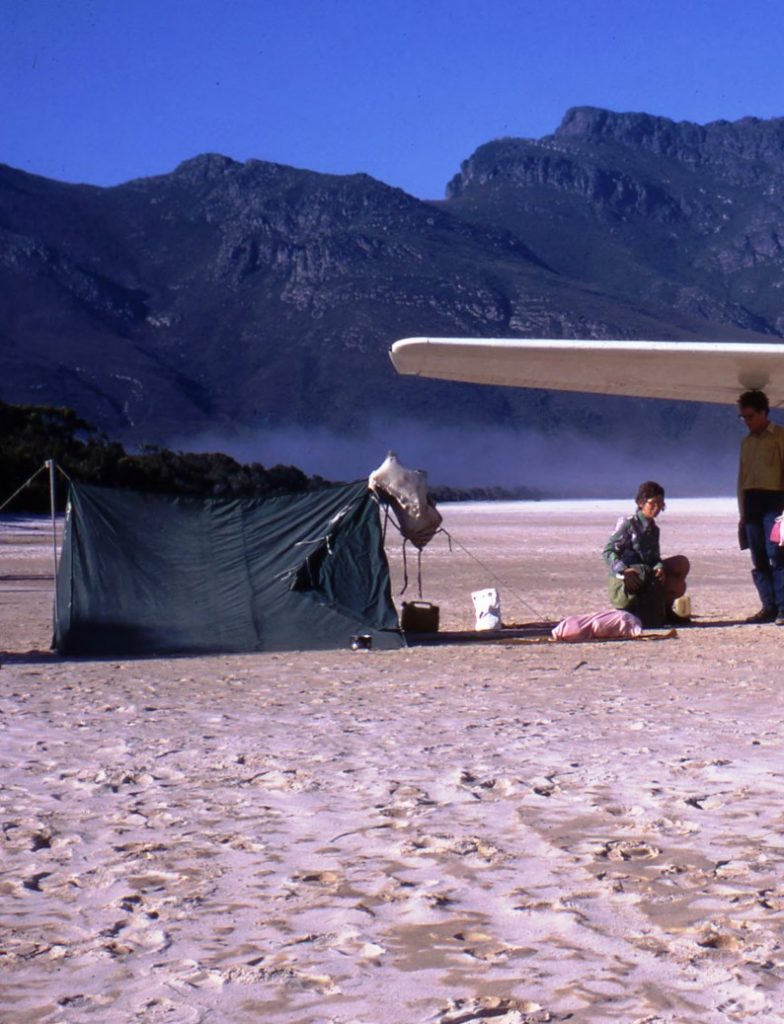 Our Paddy Pallin A-tent (no sewn-in floor then!)

Lake Pedder Prior to being flooded it was the jewel in the crown of the southwestern Tasmania wilderness. It was a shallow lake formed during the last ice age, surrounded by spectacular mountain ranges and was the source of the meandering Serpentine River. It was nine square kilometres in area and bounded by white quartzite sand. On the eastern shore there were sand dunes and a wide beach on which small planes could land. Unfortunately its national park status was revoked by the Tasmanian government to allow the Hydro-Electric Commission to flood it to create a large reservoir for a power station. Despite numerous protests over several years from the conservation bodies throughout Australia there was no change of heart and the area was inundated just a few months after our visit. Huge numbers of people either walked in or flew in to the lake in its final days. In these more enlightened times it is difficult to imagine anything similar occurring now. It should be noted that mining and logging operations near Precipitous Bluff were proposed later in the 1970s but this never eventuated. 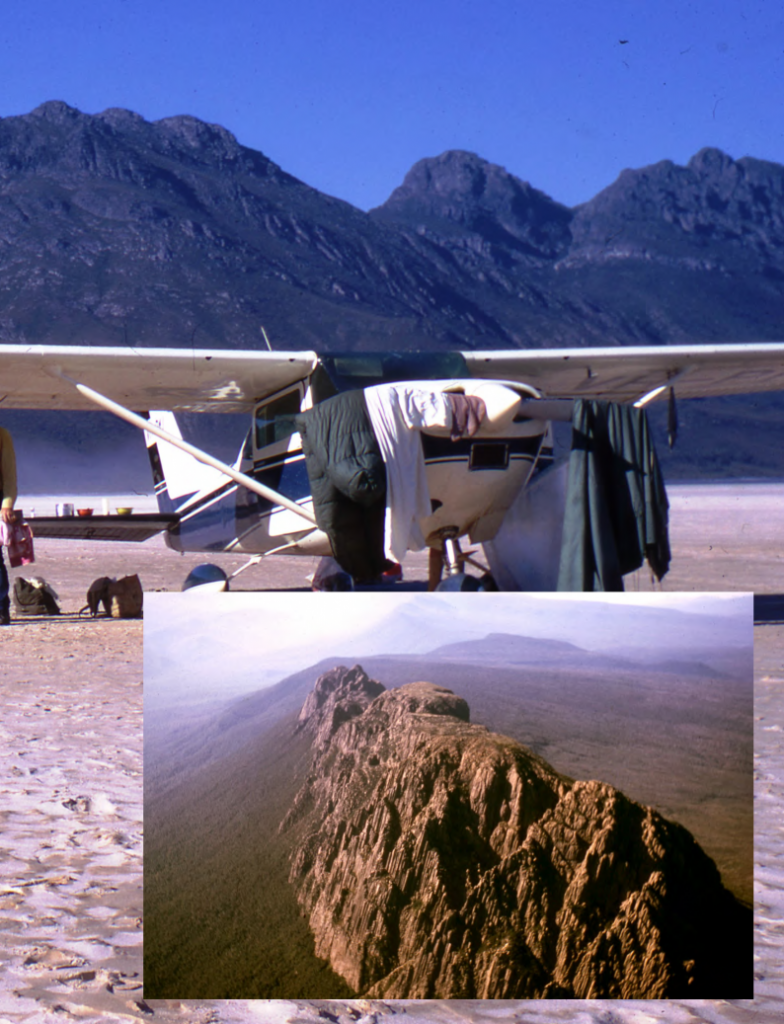 Photography At the time I only had a very basic camera and took slides (usually Kodachrome), as many members did at the time. Shots from the plane were taken on a short exposure, and being taken through the window of the plane they lost a little in clarity. For this article I scanned the slides on my Epson scanner using a frame holder that can process 8 slides at a time. Even under good storage conditions I’ve found that slides fade somewhat over a period of decades and can have specks of mould growing on them. Except for basic editing using Auto Correct for overall exposure and cropping I didn’t attempt any further enhancement of the images. The beach at Lake Pedder from the air Photo: Roger Kempson