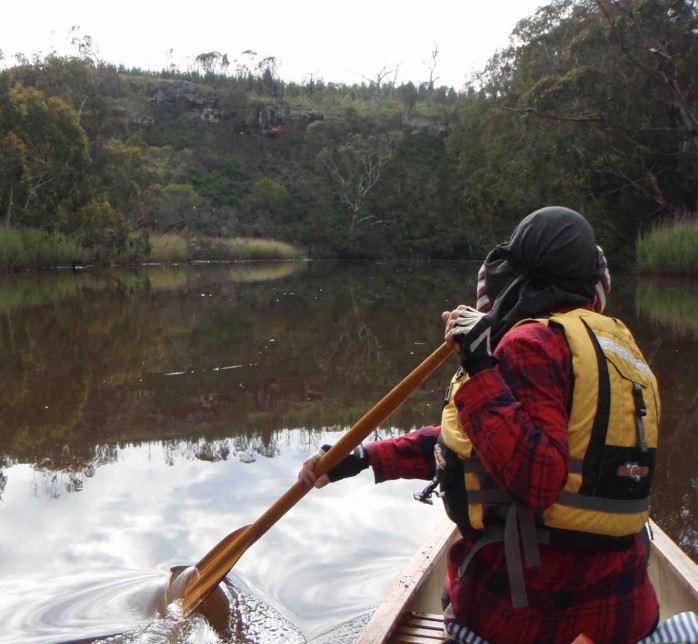 Just as Charles Ryder “revisits” Brideshead castle in Evelyn Waugh’s famous novel, we were revisiting the Glenelg River, some 30 years after our initial sojourn. Ryder develops a close relationship with Brideshead, as we also had with multiple visits to the Glenelg River over the years. Our initial courtship started on a full moonlit night at Easter, and we had a midnight paddle on the limpid waters at Moleside camp that time.

Initially a group of 4 – the Mays (Trevor and Lindy) and ourselves (David and Margaret) paddled upstream from Pines Landing to just beyond the National Park boundary. We had not been in October before, and the river was still brown from the winter rains (it forms up in the Grampians). A remarkable number of koalas were spotted in the tree branches over the water. They were quite unperturbed, and gazed down upon the silly canoeists below.

We were soon joined by the Moyles (Trev and Sharon) and David Evans and Paul Godfrey (aka “old spot”). There were plenty of pine logs as the plantation had been recently felled, so a good fire was underway, and the first of a daily “happy hour” was partaken.

A flotilla of kayaks now assembled and headed downstream. We were paddling the only Canadian – but so much easier to load and get in and out of than kayaks, especially at the landings. There is lush vegetation all along the banks of the Glenelg, and the forest was dripping. The water was like glass, and we were soon past Moleside (reeks of Kenneth Graeme and wind in the Willows) and having morning tea at Wild Dog bend. I spied the same kookaburra in a tree that had taken half a loaf of bread many years before- well, he sure looked the same!!

Now we journeyed on to Saunder’s Landing for lunch, and our first leeches!! By the time we got to Skipworth Springs the word was out, and Lower Leech campsite was established – with Trevor May proudly showing off a sandaled foot with at least 3 leeches attached!!

The firewood on the Glenelg is wet and woody – i.e. smokes a lot, and is pungent – compared to our normal diet of river red gum. Still, it is all rather civilized, with tables, fireplaces and toilets. Making toast is possible, though not as easy. 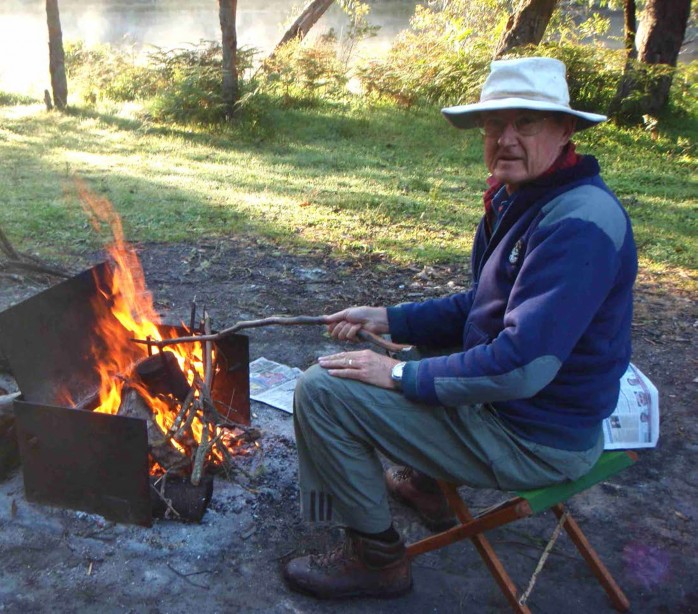 Because we had a party of 8, and the landings were often small, a staggered start was needed. We now observed a big rise and fall of the river level. This was because the river mouth to the sea was open, so there was a tidal effect on the river. The river meanders at this section, past a number of campsites and we pulled up at Forest Camp.

On every trip to the Glenelg we have seen an azure blue kingfisher. Indeed, our Canadian has an emblem of a kingfisher on the prow. We spotted a flash of blue that flitted down the river ahead of the boats from branch to branch. Other bird sitings were gang gang cockatoos, and lots of wrens.

Good progress was being made, so we pressed on to Bowds for a late lunch. Lucky we hadn’t set up as we were shortly joined by a group of school kids. The campsites must be booked in advance – but the system cannot be that good as we were double booked. We shared the site, and the teachers had those kids on a tight rein!! 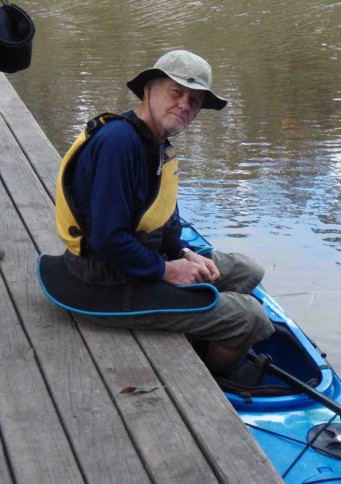 Now was the toughest day of all – a whole 8 kms to Laslett’s landing!! Some of us walked up to Princess Margaret Rose Cave (Paul even did the Cave tour), others lazed around camp and gathered firewood. I went for a bit of a solo paddle in the Canadian. This is possible by turning the canoe around and paddling it backwards. I was able to cruise right up beneath the towering cliff faces that were forming up in the limestone country.

Amazingly on our last day’s paddle into Nelson we had a strong tail breeze. Often one faces a stiff westerly hammering along the straight but on this day we were blown in to Nelson. This section of river edges into SA, with it’s unsightly shacks, before coming back into Victoria. The limestone cliffs are a feature of this section, with the pine forest towering on top. 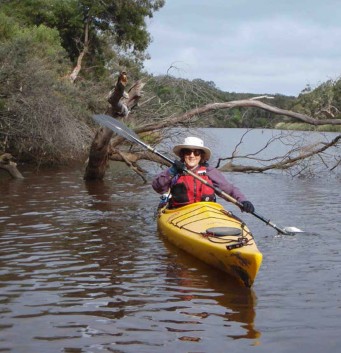 With such a strong tail breeze we cruised on past the Isle of Bags, under the highway bridge, and landed on a beach in Nelson. We were later to find out that there was a canoe roller at the Isle of Bags landing!! Shortly Ross from Paestan canoe hire rolled up in his Landcruiser to ferry the drivers back to the cars.

So, while Charles revisits Brideshead some 20 years after his first visit, we were 30 years later to the Glenelg. But while his circumstances are changed dramatically by relationships and war, we had no such inopportune tidings – merely a good trip, with good friends, and even good weather (and only an occasional leech). BTW, the steaks in the Nelson pub are rather good.!!