Some years ago, the publication of the Abels - the list of Tasmania’s peaks with at least 1100m elevation and 150m or more of prominence - prompted me to make a similar listing for the Flinders Ranges. The first task was to decide on the lower limits for elevation and prominence and I set these at 700m and 150m. Despite the 400m difference in elevation limit between the two lists, the same minimum value for prominence was used and this reflects the fact that, with few exceptions, the peaks in both regions rise a similar height above their surroundings.

Some years ago, the publication of the Abels – the list of Tasmania’s peaks with at least 1100m elevation and 150m or more of prominence – prompted me to make a similar listing for the Flinders Ranges. The first task was to decide on the lower limits for elevation and prominence and I set these at 700m and 150m. Despite the 400m difference in elevation limit between the two lists, the same minimum value for prominence was used and this reflects the fact that, with few exceptions, the peaks in both regions rise a similar height above their surroundings.

It was only after preparing the list that I learned that the 1100 m value for the Abels was derived from being two thirds the elevation of Tasmania’s highest peak. The same formula applied to the Flinders comes up with 780m and adopting this limit would have reduced the current Flinders’ list by 22 peaks.

The peaks qualifying for the list and tabled here and were derived manually using the 25 maps in the 1:50,000 topographic series that contain peaks over 700m. Finding the critical contour that would confirm a peak’s place on the list was a straightforward process for ‘stand-out’ peaks such as Mt Aleck but the actual prominence value had to be calculated for all peaks with values near the 150m cut-off limit and this means identifying the single low point between the two relevant summits.

In every case, the pattern of the contours defining the critical low point is always the same with two facing pairs of contours, one tracing the higher ground falling to the common low point, while the other pair, 10m lower, defines the ground falling away from it. (see Figure 1) It is time consuming but with practice, your eye gets faster at identifying these contour patterns on a map.

The easiest peaks to assess for prominence are those lying along a single ridgeline such as Wilpena Pound. A bit more complex is in the Gammons where the low point determining the prominence (160m) of the unnamed summit of the Yankaninna Range is the saddle that lies 12 km to its west (GR128337) and separates it from the higher Blue Range on the opposite side of Mainwater Pound.

More obscure is Mt Hack (1086m) where the closest higher ground is Wilpena’s Mt Sawtooth (1111m); 80 kms to the south and across four topo maps. While Mt Hack’s 930m contour readily establishes its bone fides for inclusion in the list, its actual prominence (560m) is determined by the lowest high ground between the peaks and which is located near the old Wilpena homestead at the top crest of watersheds between the Wilcolo and Wilpena Creeks.

Regardless of whether manual or digital means are used to determine prominence (and both are subject to the same inaccuracies in a map’s data base), it often can’t be determined with better than five-meter accuracy because firstly, almost one in six peaks and only one of the saddles or low sites for peaks in the list have spot heights shown on the map and secondly, the maps employ a 10m contour interval. To deal with this, the formula used to establish a peak’s prominence is the peak’s spot height or 10m contour below the summit minus the value of contour lying below the lowest point.

Figure 1. The red dot marks the centre of the lowest ground between the summit of interest and nearest higher ground. For Mt Rowe, the higher ground is to the NE and out of the picture and it has another but higher saddle just west of the summit.

Peaks having a ‘150m’ prominence according to this procedure include Mt Barbara, Constitution Hill and Harold Hill. Mt Rowe (on the ridge extending SW from the Gammon’s Plateau / Blue Range) has a spot height of 990m and a 750m contour lying closest below the critical saddle indicating that while its prominence is less than 150m, the contour rule was adhered to and so the peak is on the list.

Two interesting aspects of the list are the number of unnamed peaks (and compare that with Tasmania where just about every rock pimple seems to have a name) and this includes the high points of ranges (e.g. Chace and Yankaninna). It’s sometimes the case that names were often given to peaks visible from the plains or valleys but not to higher peaks they blocked from view. Examples include Peaks 16 and 58 hidden by Mt Barloo (not on the list) and Yudmautana Hill, and Peak 19 hidden by Gammon Hill. The name of ‘Mt Sawtooth’ (north along the ridgeline from St Mary Peak) is not an officially recognized name despite it being arguably the most photographed peak in the ranges.

When you compile an objective list like this, some peaks you’d like to see on the list miss out and while lowering either of the limits may include them, it also adds peaks of lesser interest. Peaks that just missed the list due to lack of elevation include the high point of Yourambulla Range 698m, Mt Deception 691m and Mt Elm 686m. Many peaks missed the list through lack of prominence and among the most notable of these are The Armchair 720m, Mookra Tower 760m, Angepena Hill and the unnamed high point of the Jubilee Range (703 m). A pity but ‘rules is rules’! The Devils Peak misses out on both counts. 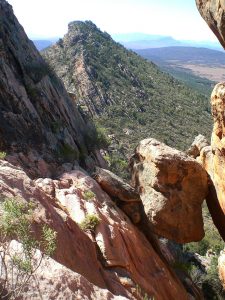 Iralbo Peak – not prominent enough. The photo was taken from the western side of an unnamed peak (Peak 58) looking north to Iralbo Peak)

Older readers will be familiar with John Bartlett-Frank Hall’s peak bagger’s guide to SA with 107 peaks listed for the Flinders Ranges (Tandanya Vol 32:4, 2002) with the peaks given points (to satisfy the peak-baggers amongst us and list being unashamedly subjective and a bit tongue in cheek in places methinks!) and with no limit set for elevation or prominence. (Any definitions of what is a mountain is completely arbitrary). It’s interesting perhaps that only 35 of the peaks in the present table also appear on the Bartlett-Hall list which contained no unnamed summits. There’s plenty of hills up there!

Scotland’s Munros is credited as being the first list of a country’s peaks published to cater for the mores of potential peak-baggers. Now there are many such lists and several for England depending on the defining limits. Most such lists appear to be named and following this practice. I’ve called the current list ‘The Jessops’ in memory of William Jessop who spent time; mainly as a guest of stations in the central Flinders in the mid-19th century. He described his experiences in Sturtland and Flindersland (1862) which gives a good insight of what the region was like at that time.

Whereas most other people such as surveyors seemed to climb hills for useful purpose, Jessop climbed them for the fun of it and wrote enthusiastic accounts of his ascents of Mt Lofty, Mt Remarkable and his attempt on St Mary Peak following the crest of the Pound from Wilpena Creek. Unfortunately, apart from what is recorded in his book, I’ve been unable to find any other information about him.

Values ending in zero and in italics are the elevation of the 10m contour line below the summit. Grid references of unnamed peaks refer to the 1:50,000 topographic maps shown in upper case.

Some notes on the Table: I was told at Iga Warta that Peak 20 is a ‘women’s business’ place and that men don’t go there. This comment was unprompted and I said that I would not go there (and felt happy that it was one less peak to climb) but it’s in the Table for the record and because female bushwalkers aren’t excluded. The high points given in the Table for Wilpena Pound’s Mt Walter and Rawnsley Bluff both lie 0.75 km from the actual summit cairns. For the Bluff, the cairn was placed at the obvious site for the surveyor’s purpose while for Mt Walter, it seems more likely to be a mapping error because surely surveyor Evans would have intended the name to refer to the equally visible but more dominant summit.