The Magic of the Loch

There might be many lochs in Scotland, but the only one I know of in SA is Loch Luna, in the Riverland. This trip, centred on the loch, commenced in Moorook where a motley bunch of canoeists assembled in early October and headed off upstream to look for Blackfellow’s Creek. A strong tail breeze negated the flow, which was considerable and promised that the backwaters would be flooded and open. After probing around we eventually found this pleasant creek and paddled up it for several kms, before reeds closed it off. 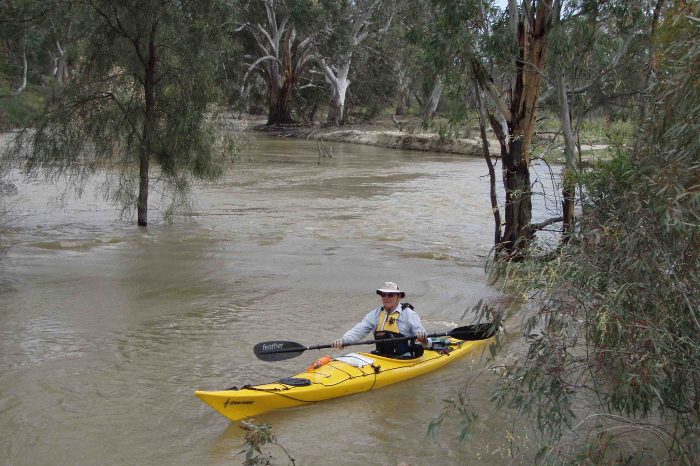 Turning back we (David and Margaret Wattchow, Trevor and Lindy May and Paul Godfrey), pulled into a delightful lagoon, being chorused by a cacophony of “banjo” frogs. A moment’s thought would have wondered where they were getting all their food from – i.e. mosquito larvae – and they turned up in droves, driving us into the tents for an early night. 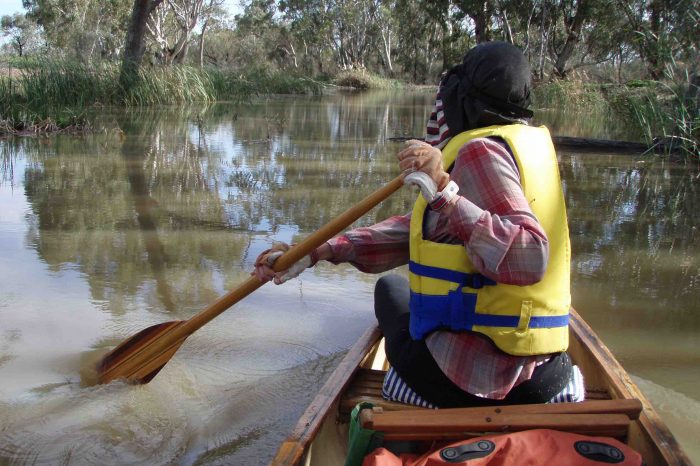 We now barrelled down the main with the flow, probing a few side creeks and Cobdogla lagoon. We were to meet Sharon and Trev Moyle at Kingston on Murray and arrived there just before lunch, sweeping past the lagoon, under the Sturt Highway, past Thurk Island then into the town. Now a mighty force of 7, we paddled on to Lock 3, chatting to the lockmaster as he let us through. The river took us quickly down to Overland Corner where the campsite was rather ordinary, but close access to visit the historic hotel for a drink and dinner in the secluded gardens. No dehyds this evening!!

Trev (T1) and Lindy went back upstream to the Lock, and the rest of us went shortly downstream past the cliffs, and into Banrock Creek. This was flowing with the high water, and at one point crossed a road forming a fast water race that was quite challenging. But it “went” and soon we were in the main stream with a strong tail wind whipping up waves and driving us past Ball island and back to the Lock. It was windier in the lock chamber this time, and we hung on to the ladder rungs that come down the lock walls.

Just after the lock exit one enters the upper sections of Loch Luna. The wind was really getting up now, forming white caps on the lake. This was a rather exciting ride to a campsite on the bank, and we we glad to pull off the water as a swamping was on the cards. A lazy afternoon followed as the wind reached about 60 k/hr (we judged), turning the loch into a maelstrom. It was hard to find shelter as plumes of dust filled the air. Quite a contrast to a previous trip when Trev Moyle and I had seen lots of bird life – there was none now, all blown out. But in general the birds were dissipated across the flooded country. We did see some families of swans and pelicans, and some azure blue kingfishers.

Eventually it died down a bit, and we had a nice fire and shelter behind the lignums. It was much more sheltered in the backwaters of the Loch, and we explored all the creeks running upstream from the camp (the most Easterly ends up in a dead end amongst reeds). Detouring around SugarLoaf Hill we entered a rather gooey lagoon, pulling off for lunch at Chamber’s Creek. It made more sense to come back via the Southern section, which does come quite close to the Sturt Highway thus giving quite a contrast between the serene waters of the Loch, and big interstate trucks thundering along the highway. We found a third waterway in this area, taking us back to the camp early and another lazy afternoon.

Paul Godfrey and I struck up a repartee based on Biggles (the fictitious WW1 British flying ace). Terms such as “old bean”, “old trout”, and “old sponge” were bandied about, along with “sizzling sauages”, “we got the blighter” and “I’ll be deuced”. Not a great deal of sense is spoken on these trips, though another good night around the campfire ensued.

It remained to paddle out via the delightful Nockburra Creek to the main river, then back to Kingston on Murray to get Trev’s car. I managed to demonstrate the slippery nature of the river mud on the water’s edge, taking a dunking. All finished up well though, concluding an exploration of this wonderful area with good friends and close to Adelaide.