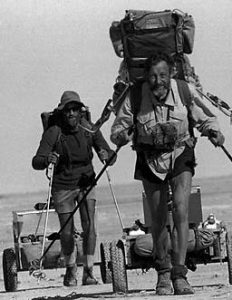 At the Club’s General Meeting on Wednesday 2nd March this year, the guest speaker was Terry Krieg, author of the book Walking with Warren which was first published in November 2013. Terry spoke of the walks he did with Warren in South Australia between 1975 and 2002, both short and long.

In particular, Terry told us of the first walk in 1975 from Mt Hack to Hermit Hill, a traverse of the Willouran Range, North West Flinders Ranges, and then the well known “circumambulation” of Lake Eyre in 1982.

The latter walk was called Walking on Eyre by Terry, and the meeting was given the great pleasure of viewing Terry’s movie (now on DVD) of the 33 day unsupported walk anticlockwise around Lake Eyre with Warren.

At the meeting, Terry made available copies of the book for members to purchase. I duly bought a copy, and had read it within 2 weeks. As a result, Terry’s presentation and my reading of the book prompted me to write this article about our patron of long-standing, C.Warren Bonython AO who died in April 2012. Warren was much admired by Terry and many other people, including myself, in South Australia and elsewhere.

Warren came from the influential Adelaide Bonython family, and after working as a chemical engineer with ICI, he applied his initiative and drive to many environmental and conservation interests and organisations such as the Uranium Advisory Council, Royal Geographical Society, National Trust of SA, Scientific Expedition Group, Nature Foundation, Nature Conservation and many others.

Warren was instrumental in establishing our 1200km long Heysen Trail that so many of us bushwalkers cherish. Warren also used his influence with governments in the creation of more National Parks in SA. His achievements were testimony to his physical toughness and endurance, determination and thoroughness in planning, preparation and recording of trips.

The best known of Warren’s other walks are:

My copy of Tandanya Spring 1980 (that was when I joined ABW) tells me that our Patrons at that time were Professor Norman Tindale and Mr. C. Warren Bonython, and a pencilled note therein tells me that Warren was our sole Patron after March 1982. I have not delved into Club records to find out when Warren was first appointed a Patron of ABW, but he was so for a long time. I can recall several occasions when Warren took part in our events: 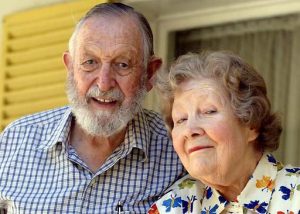 I received a Gold Certificate and a Remarkable Achievement Award. All certificates were signed by Warren. A former member, Graeme Oats, who had taken part in some of Warren’s walks, transported Warren on this occasion.

There is no doubt in my mind that Warren was a worthy Patron of ABW. The President at the time, Ian Dickinson, and one or two other Club members and I attended Warren’s funeral service at St Peters Cathedral on 12th April 2012. Terry Krieg gave a glowing eulogy at the service – after all, Terry had walked with Warren “during one half life” as it says on the cover of his book.

This walk took place on Sunday 6th October 2013, and my full article on this event was included in the Summer 2013 edition of Tandanya. In memory of Warren who was the inspiration behind the establishment of the Heysen Trail, Friends of the Heysen Trail arranged for walking groups to walk the whole of the trail that day. ABW was assigned seven sections covering most of the Heysen Trail between Dutchmans Stern and Bunyeroo Gorge. In his latter years, Warren always wore yellow shorts walking, so some us did just that. Those who took part in the event, including yours truly, remember the event with great satisfaction.

The Bequest and the Bonython Memorial Water Tanks Project

About a year after Warren’s death, ABW was ad- vised by his Estate that he had bequeathed $10,000 to the Club, with no stipulations as to how the money was to be used. A sub-committee, led by our current Patron Duncan Chessell, is now working on a plan to install 4 or 5 shelters with water tanks in areas of the Flinders Ranges away from established walking trails, and in areas attractive to walkers.

I have the pleasure of being involved in the project, and so far, a design of the structure has been prepared and costed, prospective sites have been visited, and land holders negotiated with. In a year’s time, we hope the project will be complete.

In his book,Terry Krieg talks about his interests in addition to walking. There is a chapter called Nuclear Power in which he expresses his views on future power generation in Australia and the
rest of the world. I think this is a well-balanced and informed viewpoint, and I recommend that any members interested in the subject should read this chapter.

In conclusion, I hope that members, particularly newer ones have gained from this article an insight into the life of this remarkable South Australian.