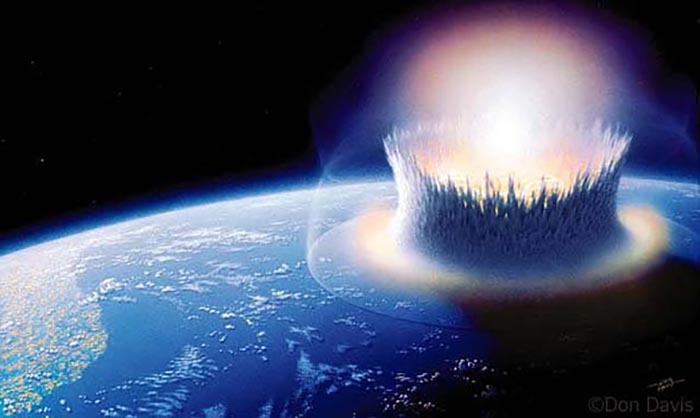 This image is actually of the famous ‘dinosaur killer’ asteroid that hit the earth 65 million years ago about 45 seconds after the impact. This asteroid was twice the size of the Acraman Impact. Artwork copyright Don Davis donaldedavis.com

Lake Acraman on Eyre Peninsula is the visible remnant of a cataclysmic event that occurred about 550-600 million years ago that shook the earth literally to its foundations. An asteroid approximately five kilometres in diameter slammed into the ancient Rodina Supercontinent penetrating deep into the earth before vaporising and releasing approximately 1.5 x 107 megatons of energy and an impact-induced seismic shock of about 10 on the Richter scale “and possibly of a magnitude not previously recorded.”

The consequences for earth were profound and long lasting. As expected there were resulting tsunamis of massive height, perhaps over 100 metres, and huge quantities of dust and debris were blasted into the atmosphere and probably into space to encircle the earth before falling back.

The size of the area of the earth surface severely affected was approximately 100 km in diameter with a crater of at least 40 km diameter. Geological surveys and drilling programs in South Australia have discovered ejecta still visible as a thin sedimentary layer in a vast area of the outback from the Officer Basin near the Western Australian border to the Flinders Ranges. Objects from space typically enter the atmosphere at >10,000 km/hour so a five kilometer wide lump of rock at that speed could be expected to do some damage!

Evidence of the Acraman Impact in the Flinders Ranges