After much talking and planning the first two water tanks of the Warren Bonython Memorial Water Tanks Project have been installed. The first was placed at Mainwater Well in the Gammon Ranges and the second at Yudnamutana mine site on Mt Freeling Station.

After much talking and planning the first two water tanks of the Warren Bonython Memorial Water Tanks Project have been installed. The first was placed at Mainwater Well in the Gammon Ranges and the second at Yudnamutana mine site on Mt Freeling Station. 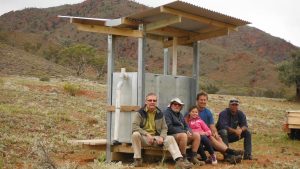 Warren Bonython was a famous bushwalker and explorer. He was the club’s patron of over 20 years and when he died in 2012 he left $10,000 to the club. It was decided to use the money to build water tanks to enable long walks in regions not well served with reliable water.

Warren’s vision, having walked the length of the Flinders Ranges in the 1967-8, was to build what became known as the Heysen Trail. This was accomplished by volunteers working for the SA Government project and the trail is still owned by the government. The northern end of the Flinders Ranges is the diabolically named Mt Hopeless but the government has limited the Heysen Trail to finish at Parachilna Gorge. The vision of this project has been to extend walking opportunities beyond the present Heysen Trail to complete Warren’s vision.
The main players in this project have been: Duncan Chessell (Project Leader), John Bartlett (Architect), John’s grandson Alex Hamam (building advisor), Mal Kirkham (builder), Dean Johnson (mechanical plumber), Bob Geary (map specialist), Mike Round (ideas man) and me (scribe).

Two site surveys were conducted in April/May 2016; one to Gammons region and the second to the Patawarta and Bendelby Ranges properties. These allowed us to focus on two sites for installation in 2016.

Mainwater Well is part of indigenous land in the Gammons NP. This park is administered by the Parks office in Port Augusta with aboriginal rangers living in Balcanoona as site experts. We received good cooperation with the Parks service for a tank in this location but they said that they wanted to have a ranger present during our construction to ensure that there was no disruption to indigenous people or property. Shortly before the building of this tank the local elder told us he was unable to accompany us but he said that we could go ahead anyway.

Mike Round opened up discussions with the manager of Mt Freeling Station which is a vast former sheep grazing property on the northern side of the Mawson Plateau which now concentrates on eco-tourism. These discussions suggested Yudnamutana as a worthy site needing a reliable water source. Later discussions with the land owner (Colin Twelftree) concurred that even though the property was for sale, our tanks would be a good contribution to the current purpose of the property.

A working bee was held at Alex Hamam’s house at Hallett Cove on 25 – 29 June where the first two tanks were pre-fabricated and then loaded in a tandem trailer for transport to the eventual installation sites.

We commenced the installation trip on 19 August with Mal Kirkham, Dean Johnson and me in Mal’s 4WD towing a trailer with 46 bags of concrete, six jerry cans of water and various digging tools and our camping gear. Duncan drove his 4WD accompanied by his ever-cheerful and inquisitive daughter Zara. They were towing the materials for the two water tanks and various power tools along with a generator should we need to recharge any of them. 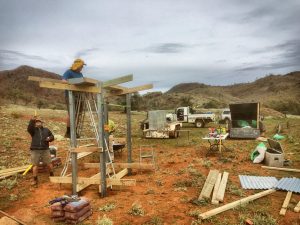 The early phase of construction. Mal and Duncan are wondering if something has gone wrong? Photo: Dean Johnson

We drove 600 km to Copley where we turned off the bitumen. The dirt road got narrower and more rutted the further we went. We passed through Owieandana and Yankaninna stations when an Operation Flinders event had just finished. That was the last we would see of humans except for two 4WDs at the old copper smelter at Bolla Bolana. Emus, kangaroos and the occasional bearded dragon or shingleback kept us alert as they tried to block our path.

Most of the next two days was spent with the vehicle gear box in low range and fairly often in first gear. The terrain was wonderfully interesting but desolate, dry and hilly. From Copley it was 100 km to Mainwater Well. We stopped only once to look at the abandoned homestead at Idninha which is apparently to be refurbished as holiday accommodation.

We arrived at Mainwater Well after eleven and a half hours of driving from Adelaide. This gave us just enough time to inspect the site surveyed by Bob Geary and Dean Johnson before dark. We quickly agreed with the chosen site so unhitched the trailers and drove to a nearby camping ground. Mainwater Creek was remarkably full of water suggesting that this site hardly needed a water tank but we all knew that this water would all be gone within a few weeks.

We were all on site ready to start construction at 7:15 on the Saturday morning with the temperature under four degrees. We wanted to start early as we had no idea how long it was take to build this our first tank. In the back of our minds we knew that we had not yet constructed any tank stand and whilst the first tank had been put together during the pre-fabrication stage, the second tank was only measured, cut and drilled to be the same as the first tank (or so we thought). It had never been put together at all. John Bartlett had wisely insisted on marking every piece of timber so that we knew what it was (bearer, purling, seat etc.) and where it fitted within the design.

The location of this tank site was 30 metres from the Mainwater Creek but was still part of the flood plain. We decided that whilst there was a chance that the area might flood during extreme conditions, the flow of water would be slow and thus unlikely to damage the tank stand. The ground was very stony with quite loose soil so the holes were not difficult to dig but the sides of the post holes were not stable. There was a chance that the walls of the post holes would collapse so we added flat rocks to constrain the size of the holes to something that we would be able to fill with the limited number of bags of concrete that we had.

The work proceeded quickly with two of our party constructing the tank stand, two others digging and lining the holes with flat rocks and Zara was fetching tools, fastenings and boards as well as taking photographs. By 1:30 pm we had the tank stand in the holes, quick set concrete mixed and poured into the holes and the water tank locked in position. We stood back and admired our work. At this point Zara carried over three boards marked, “tank bearers” that we had forgotten to install. Fortunately, we were able to lift the water tank 10 cm and slide in the forgotten bearers.
By then our work for the day was finished. So while Duncan took nine-year-old Zara off for a driving lesson in his 4WD with a two-tonne trailers hitched on behind, the rest of us settled down for lunch. We later spent the night at Mainwater Well. 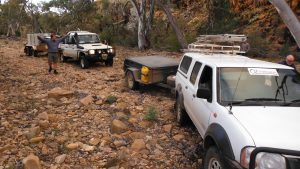 The construction convoy: Two 4WDs, 1 and 2 tonne trailers, four constructors and one mascot

The route from Mainwater Well to Yudnamutana took two and a half hours to complete 52 km. It was only passible with a serious 4WD and a lot of experience – especially towing a trailer. The views from the top of the various ridges were awe inspiring. But the task of deciding which way the rough track went was challenging. This far north there are some public roads but no signage. It is mostly farm and prospector tracks; many of them not often used, not all of them shown on the topographical maps and all of them bone-jarring experiences. At one point our path was blocked by a defiant bearded dragon who refused to move off the track until Dean (kindly) showed him his boot.

Yudnamutana is a complex area which was a copper mining and smelting area. It ran well from 1862 – 1867 but was interrupted by drought when there was not enough water for the working animals. Another attempt at mining in the 20th century was interrupted by the First World War.

There are many mines in the area. The Pinnacles mine is cut into a hill and can be entered via a horizontal shaft. Others like the bore mine and the Yudnamutana mine can be accessed via deep vertical shafts. In the slightly damp weather the rocks in the hills and valleys all around us were green; indicating that copper was everywhere. All buildings of the mining area are gone except for the copper smelter which is still intact. A restored graveyard shows the demise of some of those who lived there. Most died from mining accidents though Mrs Annie Barney was “shot by husband”.
Yudnamutana bore is no longer functional though the windmill and water tank are still there. The site that we chose for our water tank was beside the large and deep Yudnamutana mine. It is also close to a good campsite beside the (usually) dry creek. This would make a good base camp for a few days walking in the area. A real treasure is two waterholes beside a marked waterfall. One is good enough to drink from and the other would be good for a swim. They are located in a canyon and water could be there for several months each year.

My concerns about the second tank stand which had never been put together were vindicated when we stood back from it and discovered that the “V” shaped roof was wonky; the angles on each side were different. It had no effect on its performance so we ignored it. But we could not ignore two other mistakes. We had forgotten to take our signs dedicating the tanks to Warren Bonython and we had forgotten to buy insect screens to prevent bees from entering the water tank via the overflow pipe and making a hive as they have done to a number of Heysen Trail water tanks. Both of these issues needed fixing via a second trip to the area. 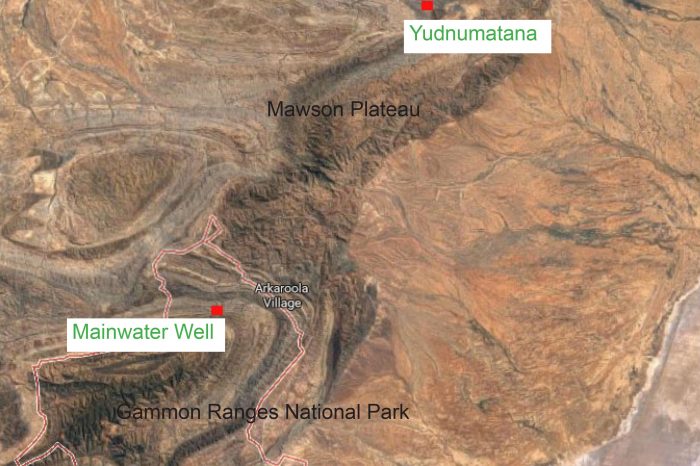 Map of locations of the Mainwater Well and Yudnumatana tank

The tanks are a great success. The design is a derivative of the design used by the Friends of the Heysen Trail; the building was accomplished swiftly by some happy campers from the club and the rains in South Australia have done their part. This gives us a path to continue walking north of the end of the Heysen Trail towards Warren Bonython’s ultimate destination at the end of the Flinders Ranges.

We aim to install two more water tanks during winter in 2017. You can be part of the team by contacting the committee and asking to join the construction effort. You don’t need any construction experience but it would help if you could dig a hole without injuring yourself.