Article contributed by a Guest

With lengthening nights the autumn skies will be on display before the weary walker hits the sleeping bags. This year a lot of the planetary action moves to the mornings, but Jupiter and Saturn will be on display for good evening viewing. The Moon covers the bright star Regulus in the early evening. 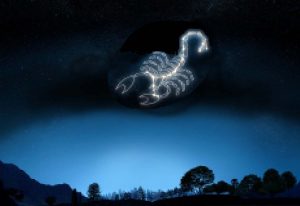 With lengthening nights the autumn skies will be on display before the weary walker hits the sleeping bags. This year a lot of the planetary action moves to the mornings, but Jupiter and Saturn will be on display for good evening viewing. The Moon covers the bright star Regulus in the early evening.

The nights of the autumnal Full Moons are Monday March 13, Tuesday April 11 and Thursday May 11. Nights on and around the full Moon means you don’t have to rely on torches, but all but the brightest stars are washed out.

On Thursday May 4 there will be an occultation of the bright star Regulus by the Moon. Regulus, the ‘heart’ of the constellation of Leo the Lion, is one of the brightest stars in the sky. About once every 10 years or so there is a short period where the Moon passes in front of Regulus. Regulus was last occulted in 2008, and after this event an occultation of Regulus will not be seen again in Australia until 2025.

Regulus will be clearly visible near the Moon up until it is about to be covered so you can watch the occultation with just your unaided eyes. Binoculars or a telescope will give you a better view though. The Moon’s dark side will cover Regulus at 19:24 when you will see the star ‘wink’ out as it crosses behind the edge of the Moon. Regulus re-emerges from the other side at 20:39. This will be harder to see with the unaided eye as it comes out on the bright side of the Moon. 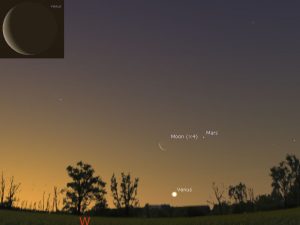 Evening sky on Wednesday March 1 looking west as seen from Adelaide at 20:18 ACDST (30 minutes after sunset). The inset shows the telescopic view of Venus at this time.

Venus, which has been dominating the western evening summer sky is low in the western twilight at the beginning of March. A telescope will reveal a stunning thin crescent Venus. After the first week of March Venus is lost to view. In April Venus reappears in the morning skies, and bright white Venus dominates the morning skies for the rest of autumn. The crescent Moon joins Venus for some attractive views on 1 March (where it forms a triangle with Mars), 24 April and 23 May.

Mars is a dim red dot above Venus, during March and April it is low above the western horizon in the late evening twilight before disappearing in May. 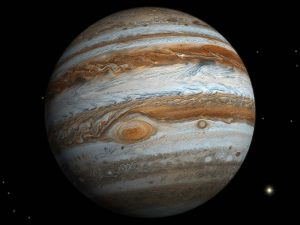 Jupiter rises progressively higher over the eastern, then north-eastern, horizon….it will be magnificent for most of Autumn. (worth finding a telescope to view with or simply a good pair of binoculars, Ed)

Jupiter is the brightest object in the late evening sky. At the beginning of autumn Jupiter is close to the bright star Spica, the brightest star in the constellation Virgo just above the eastern horizon. The contrast between Jupiter’s warm yellow colour and blue white Spica is quite beautiful.

Jupiter rises progressively higher over the eastern, then north-eastern, horizon. It is at opposition on April 8th, when it is biggest and brightest as viewed from Earth, but it will be magnificent for most of autumn.

In case you have difficulty deciding which bright object is Jupiter, on March 14, April 10 and May 7 the waxing Moon is close to Jupiter, forming a line with Jupiter and Spica which will be nice to view. If you have binoculars with you, Jupiter’s Moons are easily seen in even small binoculars.

As autumn comes to a close Jupiter moves from the north-eastern to northern skies.

During autumn the summer constellations of Taurus, Orion and Canis Major sink lower on the western horizon. Orion vanishes around mid-autumn. At the same time, Orion’s nemesis, Scorpius the scorpion, rises in the east.

The distinctive curled question mark of Scorpius is very easy to pick out. The body of the Scorpion, the stem of the question mark, contains the bright red star Antares the “rival of Mars”. Underneath the belly of the Scorpion is a bright golden object. This is the ringed world Saturn.

By April Saturn is rising before midnight. Compared to the other planets Saturn doesn’t move much, although it brightens subtly as it approaches opposition in June. Saturn is in the heart of the Milky Way and binoculars will reveal a wealth of interesting clusters and nebula near it.

Mercury is very hard to see in March and April, but May is the best time to see this fleet world in the morning skies below Venus. On May 24 Mercury is close to the crescent Moon in the morning twilight. 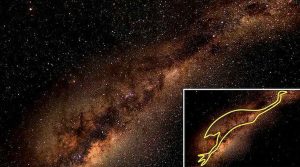 Indigenous Australian constellation of the Emu

Autumn brings an opportunity to see the constellation of the Emu. This indigenous constellation is made up of dust clouds and the dark right of the Milky Way, and it is really only visible under the dark skies of the bush. It is best seen around mid-autumn, when its distinctive shape is high enough to see before midnight.

Looking south, the Southern Cross and the two pointers are obvious around midway between the zenith and the horizon. The coal sack nebula, a dark area clearly visible under dark skies between the Cross and the Pointers, is the Emu’s head. The dust lanes below the pointers form the Emu’s neck and the dust lanes around the curl of stars that marks Scorpius’s tail are its wings and body. Once seen this “dark constellation” is obvious.