A cautionary tale on relying too heavily on memories and old maps, especially in some national parks where conditions and tracks can change significantly. It’s worth doing your homework before the trip, even if you’ve been there before. 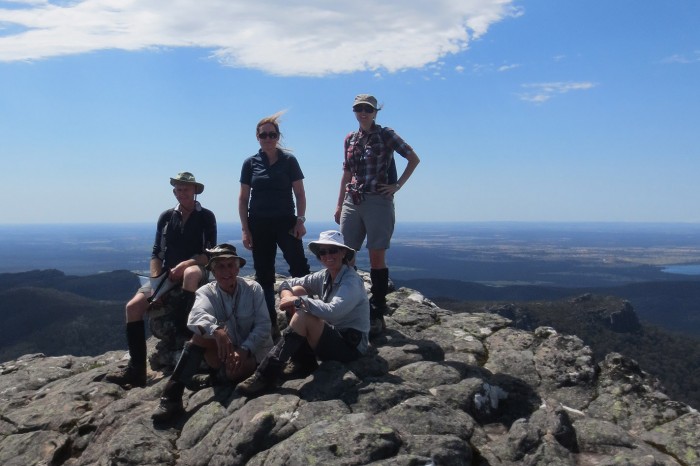 I lead a walk in the Grampians for the 2014 annual bus trip which was a really good walk with a great group but which turned out to be significantly harder than I had expected. I had been on the same walk led by John Bartlett 6 years before. At that time it was a moderate to easy walk and because Lindy and I were not particularly fit for this year’s Grampians trip I offered to lead the walk again thinking that it would not be particularly challenging. My main concern was that we’d be getting into camp at 2 or 3pm in the afternoon and everyone would be bored. This turned out not to be a problem.

I thought it would be worthwhile relating some of what happened as a caution to relying too heavily on memories and old maps, especially in some national parks where conditions and tracks can change significantly. It’s worth doing your homework before the trip, even if you’ve been there before. 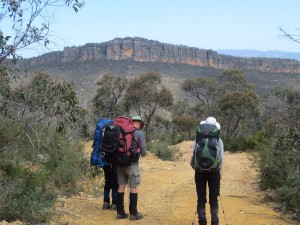 Our group took our bus from Borough Huts to the Rosea Camp Ground car park to start the walk on Saturday morning. First problem – the direction of one way road from the car park had been reversed so we lost a little time backtracking to our drop off point.

We headed off along the track to Mt Rosea to drop packs except that what I remembered as the Mt Rosea Track wasn’t and after 15 minutes I was wondering why we were heading gently down hill instead of up and Bruce Hood begged the same question. OK, we are on the wrong track, not a problem, back to the car park and bingo, tucked over the other side of the car park was the Mt Rosea track. I’d forgotten that there was more than one track from the car park. Memory !

The signage for that track to Mt Rosea said that it was 4.5kms each way. My old map showed it to be approximately 2km each way which it was 6 years ago but the track had clearly been rerouted.

So, instead of having lunch on Mt Rosea we lunched half way along the track doubting if we had time to go all the way because it looked quite rough and slow. In the end we had a go and it turned out that the remaining track was well made and relatively easy despite the terrain so we enjoyed the spectacular views from the top.

After picking up our packs we followed the 4WD track to China Wall, visited the overhang and made camp near Tower Hill by 4.30 in the afternoon. A good day and no spare time to kill.

Next morning we left our packs and headed along a creek into the scrub to the spectacular Calectasia Falls. The scrub was a bit thicker than last time so it was slow going but we made it OK. Along the way we found a sparsely marked route from the falls to nearby Tower Hill which we decided to follow instead of returning the same way to our packs. This worked well, got us to Tower Hill which we’d planned to climb and saved us having to scrub bash back to our packs.

On with our packs and on the road again towards the turn off towards Middleton Gap only to be confronted with a ‘Road closed to 4WD vehicles and walkers’ sign! Apparently an endangered bettong or similar was being reintroduced to the wild and they didn’t want them disturbed in any way. ‘What now brave and fearless leader’ was the silent question? Easy, we’ve got less than 22 hours to get back to the bus so we can’t go back and if we walk really quietly and stop singing, there being only 5 of us, we shouldn’t disturb the animals. I decided we had to press on and we did.

Down into the valley we descended looking for the 4WD track turn off toward Middleton Gap. At one stage we passed a small cleared area on the left but as we started to veer in the wrong direction there was still no intersection. As I was beginning to look about and wonder Bruce again begged the important question. Out with the GPS ! Yes we’d passed the intersection which turned out to be the cleared area about 500m back. It was the now disused track completely blocked and hidden by two fallen trees and a lot of new growth. Silly old me expecting a gate and clear track junction.

This track, that we’d happily trundled along 6 years before was now blocked by fallen trees and completely overgrown in places with weedy, prickly undergrowth which was uninhibited by the presence of older, mature shrubs and trees above as it normally would have been. In places the track was hard to find and almost harder to navigate than the surrounding bush. Down into the valley and up the other side we went, slowly. Eventually, as expected, what was left of the track ended and we navigated through the scrub towards Middleton Gap with the intention of camping near water. The scrub was thicker and harder going than previously due to plenty of local rain it seems and there were lots of fallen trees. Nothing we couldn’t handle, just prickly and slow.

We eventually made a rough but OK bush camp on the side of the valley near water at around 5pm after a bit of searching and clearing fallen trees. What ? no time left to kill again ? However we had a comfortable and pleasant evening.

Next morning, with around 4kms to go I was anticipating a demanding but short walk back to the bus in plenty of time to get changed and brew some coffee. The undergrowth was quite thick but we picked our way through it OK, albeit slowly, to Middleton Gap. All was looking good for the down hill run along the track to Borough Huts.

I decided to save some climbing to the high point at the gap by contouring around to the very sparsely marked route down to the 4WD track. So we did and right into high grass and undergrowth in which were concealed large fallen trees some of which you couldn’t climb over ! Bad decision Trev. So I abandoned that idea and led my party, still in surprisingly good humour, clawing our way up to where we should have been and onto the route down.

Ah, that’s wasted a bit of time but we’re still OK and look, here’s that track, but look again, it’s as badly overgrown as the one we’d left on the other side ! At least it’s all down hill. In fact the track was so badly overgrown that we lost it briefly a couple of times. There were even some tape markers to help follow what, 6 years ago, was a clear 4WD track. So with track scrub bashing and fallen trees I was starting to see us being late back for the bus, forget brewing a coffee !

We made it back to the bus with 20mins to get changed, somewhat scratched, torn, bloodied and dirty but all was well. Fortunately for me I had a strong and very good humoured team (Bruce – Co navigator, Tracey, Ellen and Lindy) which made the whole walk enjoyable and a great team effort, despite the unexpected difficulties, for which I was very grateful.

Other than doing one’s homework and not relying on old maps and memory it pays not to make assumptions, to plan conservatively and be prepared for the unexpected. Can I remember that?

A subsequent look at on-line maps for the national park did not say anything about the state of these tracks so perhaps we would have gone there regardless of any homework. The national parks tend to cater mainly for day walkers and walkers using a few managed and specified tracks and camp sites. If you are doing something a bit different, as we often do, you have to be prepared and plan accordingly with some margin for the unexpected.