Article contributed by a Guest

Winter has long dark nights, ideal for viewing our splendid winter stars. It is also bitterly cold, but do take time to rug up and walk away from the campfire to catch our winter gems. This year, three bright planets dance with the Moon in the evening skies.

Winter has long dark nights, ideal for viewing our splendid winter stars. It is also bitterly cold, but do take time to rug up and walk away from the campfire to catch our winter gems. This year, three bright planets dance with the Moon in the evening skies.

The nights of the winter full moons are Wednesday June 3 2015, Thursday July 4 2015 and again on Friday July 31 2015 (a so-called “Blue Moon”) and Monday August 30 2015. Nights on and around the full moon are great for not tripping over things in camp, or night walks. However the brightness of the Moon washes out the magnificence of the Milky Way overhead.

The three bright planets that graced the autumn skies, Venus, Jupiter and Saturn, continue to bedazzle us in early winter, with Venus and Jupiter coming very close together in late June and early July. Bright Venus is easily visible in the western skies during twilight and the early evening. It is reasonably high in the sky in June and early July 2015, but by early August 2015 you need a fairly level, clear horizon to see it. On June 20 2015, the crescent moon is close to Venus and the pair form a broad triangle with Jupiter. On July 1 2015, Venus and Jupiter are half a finger-width apart in the early evening sky. On the July 10 Venus is at its maximum brilliance. Under very dark skies you may be able to see shadows cast by Venus on Earth. On July 19 2015, the crescent moon, Venus, Jupiter and the bright star Regulus make a diamond in the north-western sky, easily visible from late twilight. After this, Venus and Jupiter head towards the western horizon. On August 7 2015, those with a level, unobstructed horizon and good eyesight can see Jupiter, Mercury and Regulus grouped together about 30 minutes after sunset, with Venus nearby.

Jupiter is the second brightest object in the sky after Venus (and the Moon and Sun of course). It is visible above the north-western horizon not far from Venus at the start of winter, easily recognisable by its brightness and its warm yellow colour. This contrasts with the dazzling white of Venus. During June the pair come closer, and are closest on July 1. If you have binoculars with you, Jupiter’s moons are easily seen in even small binoculars. After the first week of August, Jupiter and Venus are lost in the twilight. 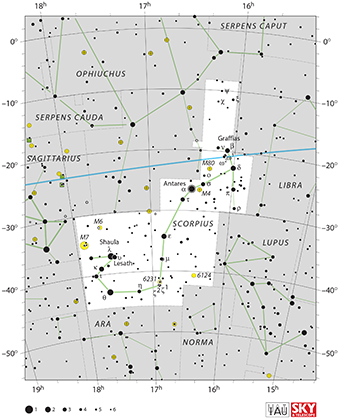 In winter, the distinctive curled question mark of Scorpius, – the scorpion – is riding high in the sky. The head of Scorpius is defined by three bright stars to the left of a bright red star in the body of the question mark (Antares). However, if you look this winter, you will see what appears to be four! The bottom and brightest “star” of the four is in fact the planet Saturn. During winter Saturn pulls away from the head of the scorpion, but never gets too far away. The Moon is close to Saturn on June 1, June 28, very close on July 26 and August 22 2015. 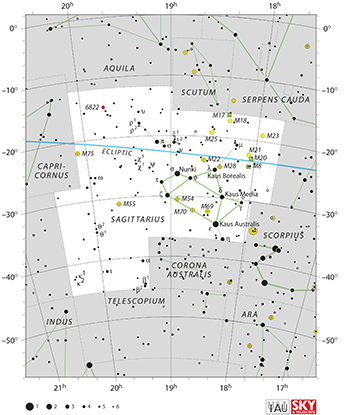 Another obvious constellation is Sagittarius – the archer. Or rather, for Australians it is the distinctive grouping of stars below the curl of Scorpio’s tail we call the “teapot”. Here we find the centre of our Galaxy. In the depths of winter, the Milky Way arches across the heavens, and its glowing star-clouds and dark dusty lanes are on display. Use your binoculars to hunt around the tail of the Scorpion as this will show a wealth of open clusters and nebula. 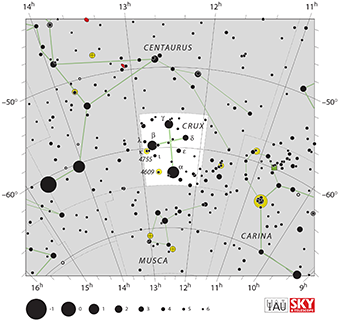 Looking south, at the beginning the Southern Cross, the Two Pointers are obvious near the zenith and the horizon. The Coal Sack nebula is a dark area clearly visible under dark skies between the Cross and the Pointers. To the right of the Southern Cross and below, is a rich sky area hosting the constellations of Carina, Puppis and Vela. Again a pair of binoculars will reveal a wealth of delights. As winter wears on, the Southern Cross rotates towards the southern horizon, and many of these beauties will be hidden.

This doesn’t exhaust the winter night skies, so keep your eyes peeled.