This item reports on an environmental monitoring project being conducted in the Vulkathunha-Gammon Ranges National Park by members of the Park’s Friends group. Early reports on this project have appeared in the Autumn, 2017 and Summer, 2019 issues of Tandanya. It is a Citizen Science project that sees Friends group members working under the guidance, and with the support, of scientific professionals including Mr Robert Brandle, Senior Conservation Ecologist, DEW. (from Tandanya Autumn 2021)

This item reports on an environmental monitoring project being conducted in the Vulkathunha-Gammon Ranges National Park by members of the Park’s Friends group. Early reports on this project have appeared in the Autumn, 2017 and Summer, 2019 issues of Tandanya. It is a Citizen Science project that sees Friends group members working under the guidance, and with the support, of scientific professionals including Mr Robert Brandle, Senior Conservation Ecologist, DEW. 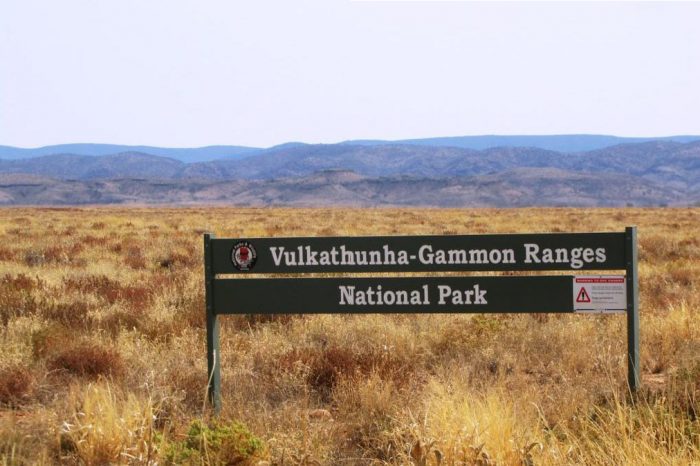 The main focus for the monitoring is a set of three permanent springs, and their associated wetlands, all of which are habitat for the nationally endangered fish Mogurnda clivicola. The common name for the fish is ‘Flinders Ranges Gudgeon’ and the local Adnyamathanha people call it Wirti Udla Varri. Two of the springs, Weetootla and Yuwanhinya, are located inside the park about 9 km north-west of the park headquarters at Balcanoona. The third, Nepouie, is located on the nearby Wooltana pastoral lease about 8 km north-east of Balcanoona. Nepouie is not accessible to the public and the Friends group visits that spring through arrangement with the pastoralist.

Weetootla, Yuwanhinya and Nepouie springs are the only known sites where Wirti Udla Varri is definitely surviving today and, consequently, there is concern about the possibility of the fish becoming extinct. Actions that have been recommended to protect against this include:
1. investigation of other sites in the northern flinders where additional populations of the fish might be successfully established;
2. regular monitoring of the existing populations to assess the quality and extent of habitat, along with fish numbers and signs of disease.

The Friends group has directed nearly all its efforts towards regular monitoring of the existing populations but is likely to be involved in assessing alternative sites, and then monitoring at those sites, if they are established.

Elements of the monitoring program:
(Fish numbers, sizes and signs of disease)
This involves physically catching fish and the group does this in accord with a scientific permit. The length of each fish is measured and recorded. This indicates the number of different generations that make up the population and gives some idea of the timing of breeding events. The fish are also inspected for tumors on their body surface. It has been reported that 10% or more of the Wirti Udla Varri population had these surface tumors. The proportion observed so far in this monitoring project is much less than this. 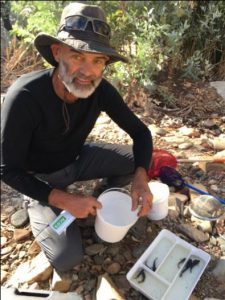 Water quality measurements:
The parameters being measured are temperature, pH, electrical conductivity, dissolved oxygen, calcium and nitrate concentrations. Water quality is an obvious criterion to be used when deciding on the choice of an alternative site(s). The fish is known to tolerate large fluctuations in water quality but survival of a single generation does not guarantee long term viability of a population where water quality is relatively poor. authoritative investigators. 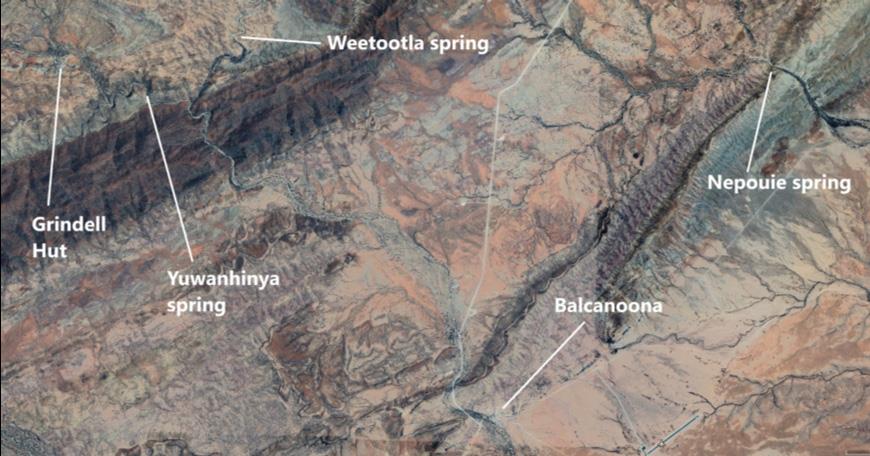 Google earth image shows where the springs are located in relation to the Park headquarters at Balcanoona and the Grindell Hut campground. 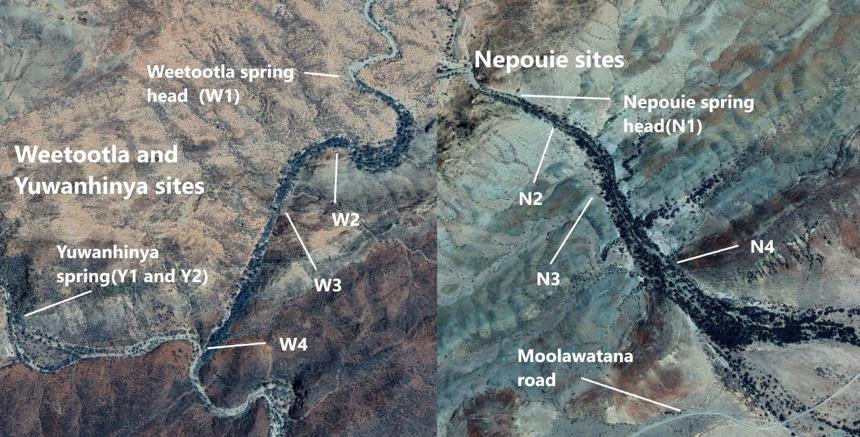 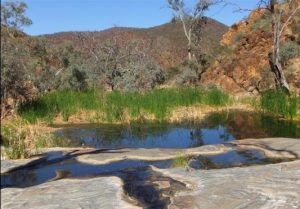 The photo above is of monitoring site W3 which remained in the condition shown throughout 2018 and 2019 when rainfall at nearby Arkaroola was the lowest since records commenced in 1938.

Spring condition: there is more than just water quality that contributes to a good habitat for a fish as vulnerable as Wirti Udla Varri. An important factor contributing to its survival is likely to be the cover provided by both aquatic plants growing in the pools in which the fish live, and terrestrial plants growing nearby. Should this cover diminish significantly, for an extended period, survival of the fish will be threatened. Alternative sites will need to provide similar cover for the fish relocated there. To assist in identifying suitable alternative sites one member of the Friends group, Ms Nicki de Preu, an experienced conservation ecologist, has combined the group’s water quality measurements for Weetootla spring with estimates of soil erosion, total vegetation cover, reed presence in pools and degree of grazing. These estimates were combined to provide an index indicating that the Weetootla habitat is currently in good condition.

Of these three monitoring elements the first two require only an interest in doing the work and sufficient physical fitness to be on foot, out in the open, for 6 or so hours. Any training required can be done on site. The walking is mostly on flat ground on marked walking trails, with distance covered being about 6 km or less. The third element listed does require sound knowledge of plants and animals.

Infra-red activated cameras have recently been acquired for use in monitoring native and feral animals in the terrain adjacent to the wetlands. The most highly visible native is the Yellow- footed Rock wallaby (Petrogale xanthopus).(image above right) It inhabits the high, rocky ground near the springs with individuals often seen in the creekline.

Feral cats are rarely seen but they are present in the monitoring area as the adjacent photograph of a dead cat at Nepouie spring proves. The infra-red activated cameras should provide a better indication of feral cat numbers. 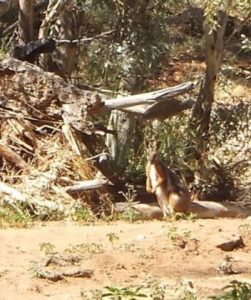 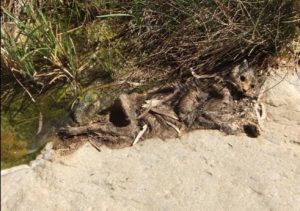 Other monitoring activities:
Locations of Native Orange or Iga trees (Capparis mitchelli) are being mapped by gps. The trees can occur singly or in groves separate from other tree species. When they are in groves there may be little or no undergrowth and this is attributed to past use of that location as aboriginal campsites.

About the Friends Group:
Friends of Vulkathunha- Gammon Ranges National Park is an incorporated body having about 60 members. It visits the Park at least twice a year for a stay of 6-8 days each time. Environmental monitoring is one of three activities in which members can choose to engage. There is also work being done to restore and enhance the surrounds of the Park Headquarters at Balcanoona through revegetation plantings and habitat enhancement. Another project involves refurbishment of Oocaboolina outstation which is located about 30 km west of Balcanoona on the Copley road.

The group has been successful in obtaining grant money to support all three
of these projects. All projects are well supported by the ranger staff at Balcanoona. Members involved in the monitoring and/or the Balcanoona work are based in the comfortable, and well- equipped, shearing quarters at Balcanoona. Those working at Oocaboolina are based on site there. Facilities at Oocaboolina are limited but this has not affected the enthusiasm of participants in that project.

More details about the Friends group, and its activities, is available at
www.rayh.id.au/vulkathunha 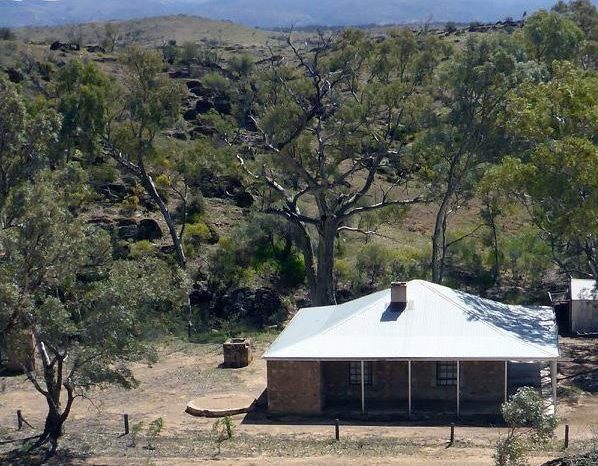