Each year the Wednesday Walkers hold a week long bushwalk / camp which is open to all club members. There is no overnight walking but the scenery and activities are great. 2020 saw 16 ABW members going to Gammon Ranges. (from Tandanya Autumn 2021)

Each year the Wednesday Walkers hold a week long bushwalk / camp which
is open to all club members. There is no overnight walking but the scenery and activities are great. 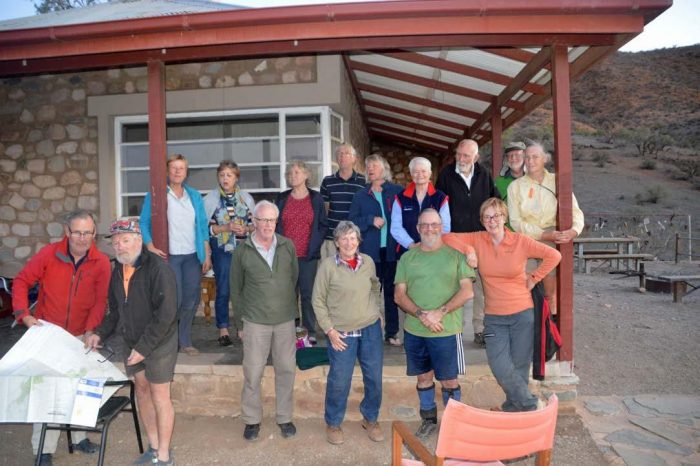 2020 was the year that I decided that it was time to return to the Gammon Ranges after a long hiatus caused largely by diabetes and the start of arthritis. Originally fate was against me because of the Corvid19 virus and our original booking of Grindell’s Hut for April was cancelled and money refunded. Once bookings opened again, I booked the hut for August/ September and crossed my fingers for this time. Fortunately this time was a goer.

We had sixteen members in the group with 8 Wednesday walkers and 8 other ABW walker. This presented a minor problem due to the differing strengths in each group. I decided that the group could be split up with different experienced leaders for different sections. People could also have rest days provided they did not wonder off. I also decided that although the hut only catered for eight people, that all facilities would be shared by the campers as well. 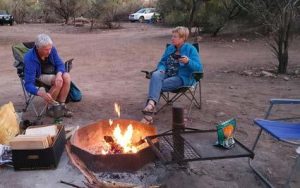 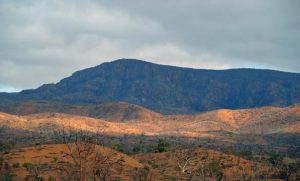 I had never seen the Gammon Ranges so dry. Even trees that I thought would outlast any drought were dead and there were very few living animals and lots of carcasses of dead kangaroos and goats. Fortunately, I did not see one living goat in the entire week that I was there. The rains came but three weeks after we left and not enough to make much difference. 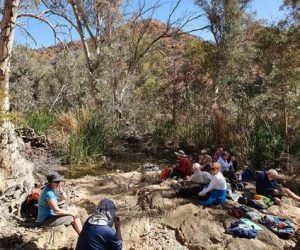 Lunch on the first day in Weetootla Gorge

Day 1 31st August written by Edward
All sixteen members of the party went on a walk to Monarch Mine along a Royal Geographical Society of S.A. trail. This is a circular walk across the barren mountain tops to the Monarch Mine. We had many beautiful views of McKinlay Bluff, Mt John Roberts and even Cleft Peak and the Blue Range. We began the walk at 9AM. After two hours of steady minor climbing we reached the top and Monarch Mine.

Here we rested for “11’s”. Next was our sharp descent towards beautiful Weetootla Gorge. As we were descending into the beautiful Weetootla Gorge, the track gave way under the feet of one of our party. He had received some serious cuts and abrasions and sprains. I was worried for him but being a true bushwalker and after 30 minutes of first aid by other members he was able to push on although at a much slower pace.

We found water in Weetootla Spring and had lunch at the water’s edge. Surprisingly, there was heaps of bird life but no animal life (except ants). The remainder of the day’s walk was along Balcanoona Creek back to the hut along an extremely old and disused 4WD track. I allowed people to forge ahead while I stayed back and walked with our injured. There is nothing worse than being injured and left behind. We returned to the hut at about 4pm. A special shower awaiting our injured. 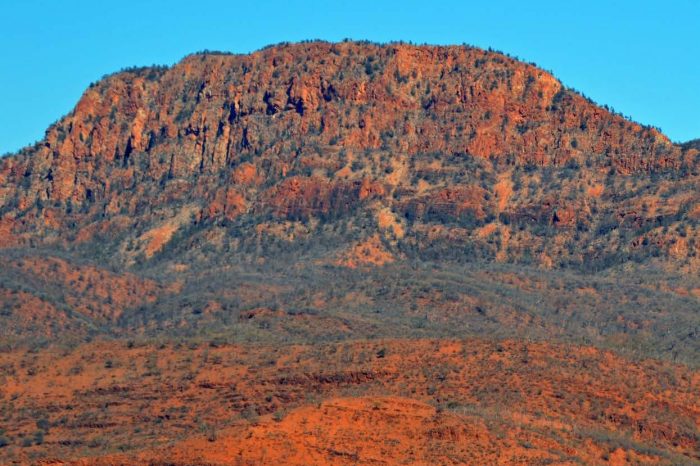 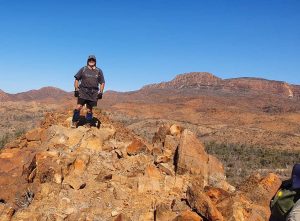 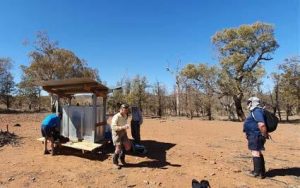 Day 2 1st September written by Don
It got down to -2C last night but my sleeping bag kept me snug and warm. Our Tuesday walk had us head up onto the Gibber Plain then a climb up and down both Edward’s Red Hill and the real Red Hill finishing at the shelter/ water tank that our club had installed in 2019 using part of a bequest from our former Patron, the late Warren Bonython. From there, those of us who still had some life in our legs, pushed on up Italowie Creek towards Wildflower Waterhole. We then returned to the 4WD track back to the start of today’s walk. Another nice cool sunny day of walking with the usual sitting round the campfire after dinner.

Day 3 2nd September written by Don (and Edward)
With balmy weather, it got down to 15C overnight. On Wednesday we had a day off from walking. Today was the 4WD tour to Sillers Lookout What a difference a day makes. After a deserved sleep in, we drove to Arkaroola, arriving at 10AM and enjoyed an early lunch and drinks at their restaurant.

The 4WD truck/troop carrier returned to Arkaroola from its first trip about an hour late. Eight of us boarded it at about 12.45pm to set off for Sillers Lookout along the Ridge Top Tour. It was only a round trip along a so called 4WD track but the whole trip took about 6 hours with three major stops and afternoon tea with lamingtons atop Sillers Lookout.

It was a fun afternoon being thrown around in the back of the truck whilst going up, down and around some of the craziest 4WD tracks we have ever been on. We drove back from lookout in fast fading light. With the help of the full moon we arrived back at Arkaroola at 7pm. We arrived back at the campsite at about 8pm. Few of us had tea that night and there was no campfire. It was straight to bed after a long but fantastic day.

As the 4WD could only take 8 people, others in our group did an 8km circular walk from Arkaroola Village through the Mawson Valley to the Pinnacles and back along Spriggina Ridge. As luck would have it, they arrived back at Arkaroola about ten minutes after we started the Ridge Top Tour. 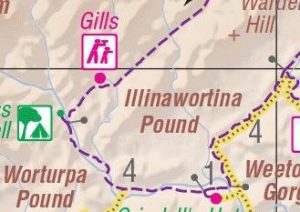 Day 4 3rd September written by Don
Today we walked across Illinawortina Pound to an interesting creek that gorges through the nearby hills towards Wurtupa Loop Track. We followed this dry creek bed up the valley for a couple of hours until lunchtime. After lunch, the majority of the group retraced their steps back to Grindells Hut. Six of us continued up the creek, then over a sharp hill and into a parallel gorge for the return journey. This creek was much smaller and scrubbier so we had to stay on the slopes above vegetation.

Suddenly the vegetation cleared away and we arrived above a 30 metre high vertical dry waterfall. We had to scramble around rocks which was interesting and scary indeed. Once we were at the bottom of the waterfall, we were able to follow the dry creek bed out onto the plain and back to the camp. Another very long and tiring but interesting day. 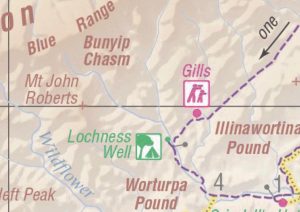 Day 5 4th September written by Don
Today, Edward (leader) went off to investigate some local mines. The rest of us drove to Loch Ness Well where we parked our cars. Roger Kempson led today. We walked up the top end of Balcanoona Creek deep into the Blue Range.

We were walking towards Bunyip Chasm looking for stray bunyips. I had heard of Bunyip Chasm before and I was finally getting there. Our leader had told the adventurous ones of our group not to climb up the gorge at the end due to some deaths while climbing into it (in other words it is a dangerous climb). We reached the first waterfall where most of us stopped for lunch. Four of us climbed up and through it to the impenentrable area which if I was younger, I would say was “do-able” We then returned to the start of the chasm, ate lunch and caught up to the others on the return journey. The Chasm is very similar to Stanley Chasm in the West McDonald Ranges out from Alice Springs but much more difficult to walk through.

(Edward) Although I have made many trips into the Gammon Ranges, I have only ever climbed to the end of the Bunyip Chasm twice. The first time, I was young and stupid and the second time, I freaked out halfway while descending the chasm. I had to close my eyes and follow verbal directions from below and put my faith in other people. 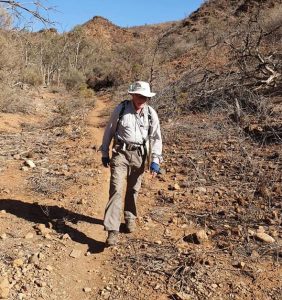 On the Saturday we divided into 2 groups for our final walks of the trip. Three walkers decided to do a big walk to the top of McKinlay Bluff and the others, a reasonably flat and straight forward 12km return walk past “Hells Gap” following the the Balcanoona Creek through Weetootrla Gorge to the Wetootla Camp Ground. Whilst I would have loved to go with the other 3, I decided that I didn’t a long and hard uphill climb on the last day! I think that I made good choice as we returned to the hut at 2pm. The mountaineers returned after dusk at 6pm. The river walk was very pretty and topped off a great week of walking in the Gammon Ranges.

Day 7 6th September written by Edward
Early on Saturday, we all said our goodbyes and headed off in the different cars back home. Some drove all of the way while others spent a night in Quorn and other places. I would like to thank the 16 people who were on the walk. We all blended with each other perfectly and we all had a fantastic week of the Gammons. To those who had been there before, I am sure that it brought back great memories. For those who were there for the first time, I hope that you now consider yourself a GAMMONITE. (Gods own country). 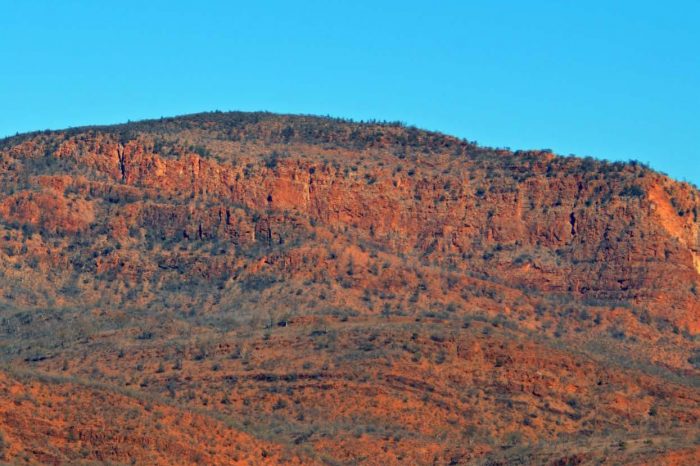