This superb long-distance walking trail in Flinders Chase National Park (known as “KIWT”) was opened in October 2016, was set up by Government of South Australia, and is under the control of National Parks South Australia. Facilities are exceptional, signage and associated literature are very good: in other words, the trail has been established to high standards, and in an area of great beauty. 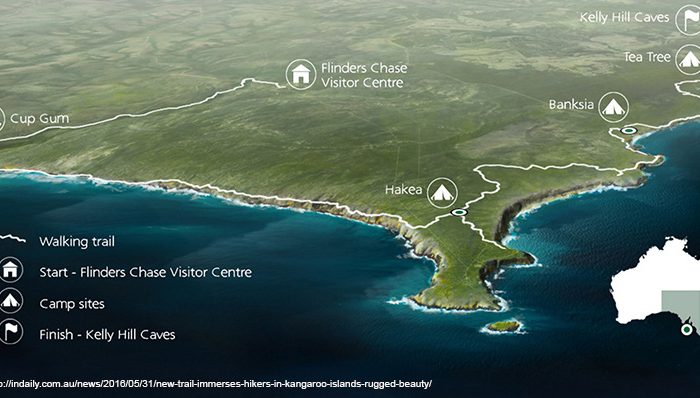 This superb long-distance walking trail in Flinders Chase National Park (known as “KIWT”) was opened in October 2016, was set up by Government of South Australia, and is under the control of National Parks South Australia. Facilities are exceptional, signage and associated literature are very good: in other words, the trail has been established to high standards, and in an area of great beauty.

Of special note is the sculptural nature of the well designed signs, gates, connection brackets on the campsite buildings, seats and benches.

The trail has been designed to be walked in five days, anticlockwise, with elaborate campgrounds at the end of the first four stages. The trail proper is 61km long, and with a few optional side trips, the length can extend to about 70km

Usual options to do the whole walk are:

In addition to the above costs, there are ferry, travelling and accommodation costs.

To make contact with the caravan park to arrange pick-up at the end of a day’s walk, either a satellite phone or standard mobile phone are used, depending on location of the campsite.

On the walk, there is spectacular coastal scenery and great variety in vegetation, wildlife and rock formations. A disastrous bushfire swept through the National Park in 2007. Regrowth since then has been amazing. Coastal heath, scrub, woodland and forest are now all lush and dense depending on soil conditions and the prescence of rock. 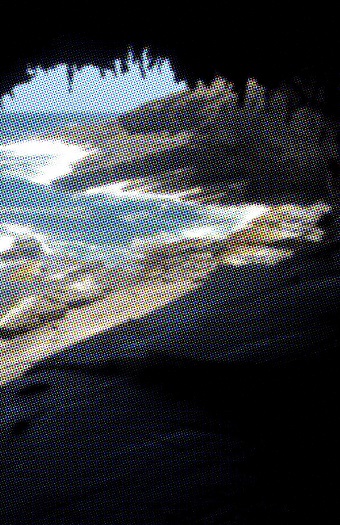 Bearing in mind that some of us had not met before the trip, it turned out to be a very friendly and happy group. We all stayed at WKICP in a mixture of cabins, tents and a campervan, with the owners of the caravan park Mark and Fiona Jago being very accommodating, friendly and helpful.

For the whole trip, the weather was very good, with no wind, temperatures in the low 20’s, and the last three days mainly cloudless – wonderful weather for a walk of this calibre The group used the bus to the start and from the finish of each day’s walk. A few other groups walked the trail at the same stages as us including a large group of Year 11 students from Victor Harbor High School.

The bulk of the party took the 10am ferry from Cape Jervis and by late afternoon, all of us had settled in at WKICP.

Starting at Flinders Chase NP Visitor Centre, the walk of 12.2km plus a small circuit of Platypus Waterholes took us through dense scrub with many wild flowers in bloom.

Not even bubbles from a platypus at the waterholes were spotted – we were there at the wrong time of day. Rocky River was followed downstream, with a rest stop at the picturesque The Cascades – no water flow at this time of year.

This day’s walk finished at Cup Gum Campsite where the bus awaited us to take us back to the caravan park. A short side trip to Snake Lagoon was available, but was not taken

As a gesture to get to know each other better, Fiona prepared a Chamma Masala meal for all, which we enjoyed around a big table in the Camp Kitchen. Mark kindly set the fire going for our benefit. 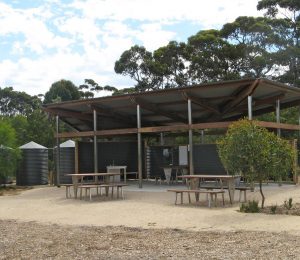 From Cup Gum Campsite, the track continued down Rocky River 1.5km to the sea, where the mouth was very open and rocky.

The coast was then followed South along cliff tops, with the sight of Cape du Couedic lighthouse progressively getting nearer and nearer. A cairn along the way commemorates the wreck of the ship Loch Sloy in 1899. Along this clifftop walk as well as those along the South coast two days later, portions of the track are very rough due to all the limestone, making progress slow and tiring, but the views were great and the coastal heath is dense and interesting, with many plants seen in a prostrate windblown formwalk, and the campsite is set in dense scrub. Walk distance this day was 14.1km. 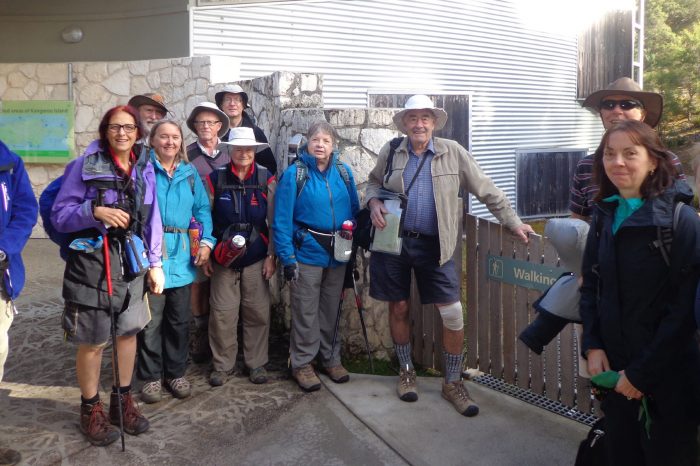 The walk along the KIWT this day was 13km, but those who started walking at Admirals Arch walked an extra 4km to get back to the KIWT, while the whole party walked an extra 2km for the Remarkable Rocks side trip. Seven from the party had the bus take them to the lighthouse area so they could visit Admirals Arch, leaving camp an hour earlier than the rest. The remaining four were taken back to Hakea Campsite and then walked on to Remarkable Rocks through mostly dense scrub.

Eventually the whole party met up at Remarkable Rocks for lunch – lots of tourists there, justifiably so because the weathered granite rocks are truly “remarkable”, being perched on top of a great granite headland.

After lunch at this magnificent spot on a glorious mild, clear day, we walked on along clifftops and through scrub to Banksia Campsite, then bus back to camp. As we walked Eastwards from Remarkable Rocks on their prominent rocky granite headland, it was fascinating to see them receding into the distance – a sight not seen by the average tourist.

A portion of the party back- tracked and took a short spur track to visit Sanderson Beach, but soon caught up with the rest of the party.

From Banksia Campsite, the track followed the clifftops on a rough limestone surface, but soon went inland through scrub to a simple boat crossing of the South West River, very tidal there. During a lunch stop here, a few went over the dunes to have a look at Hanson Bay Beach.

Cleared ground was reached before we arrived at the end of a 13.3km trail walk to Tea Tree Campsite. This area was cleared more than 100 years ago by the small Edwards family. Their restored cottage is nearby, and a portion of their cleared land has been painfully re-vegetated successfully, but there is a lot more to do. The bare land provides an artificial pasture for the many kangaroos in the area.

For the last night during the walk, we had dinner in the Nicholas Baudin Room of nearby Kangaroo Island Wilderness Retreat – a good occasion for more fellowship within the group.

As nearly all of us were to catch the 4.30pm ferry from Penneshaw, everyone packed up early so we could head off after a short walk of 7.6km to finish KIWT at Kelly Hill Caves.This last stage was totally in the shade of light woodland, with great interest added to the walk by passing both Wilderness Lagoon and Grassdale Lagoon – very still waters, great reflections and plenty of water birds. The end of this wonderful walk came at just on noon as we passed through the sculptured rusting steel finishing gate which announces:

Then the final trip in the bus back to WKICP where we did a final pack up, said farewell to our host Mark, then off to the ferry, but on the way, most of us stopped at a cafe in Kingscote for a good old fashioned fish and chips lunch.

The ferry crossing was very calm, with the low-angle sun lighting up the Southern tip of Fleurieu Peninsula. 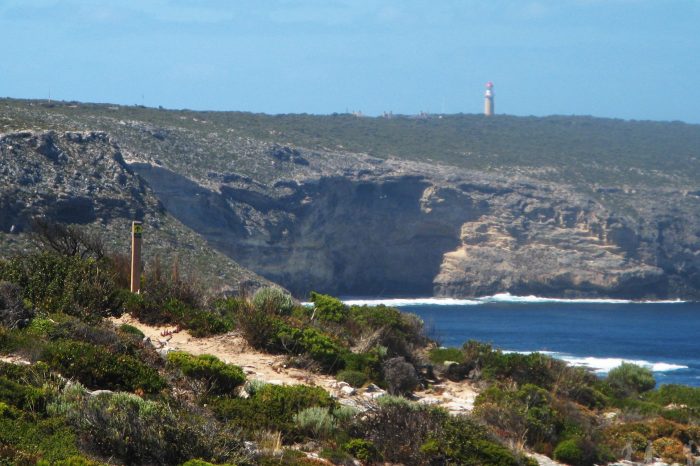 I have led many walks in my 37years in ABW, and this has to go down as one of the best.

It is essentially an easy walk, with not much undulation, but in one of the most spectacular coastal areas in the state. To top it all off, the companionship was great.