Scattered throughout our state there are trail monitors on trails and Summit Logbooks on peaks and they provide us with a wealth of information. For example they show how many walkers are using the trails which, in turn, will validate trail improvements and infra structure measures. These statistics are also useful when governments review policy such as the Pastoral Act late last year and can assist local entities in land management and regulation. From Tandanya Autumn 2021.

Scattered throughout our state there are trail monitors on trails and Summit Logbooks on peaks and they provide us with a wealth of information. For example they show how many walkers are using the trails which, in turn, will validate trail improvements and infra structure measures. These statistics are also useful when governments review policy such as the Pastoral Act late last year and can assist local entities in land management and regulation.

As far back as the late 80’s to the present in the North Tusk Hill log there are many regular entries from the Scientific Expedition Group (SEG) monitoring the biological, botanical and rainfall information. This information can be viewed on the link below.
https://www.communitywebs.org/ ScientificExpeditionGroup/main. php?pid=14
The Rover Rock Hole log led to an article being published in Tandanya, Summer edition, 2018, by Mike Round. Mike compared the number of parties, (rather than individuals), entered in the log to the rainfall over the years and these statistic clearly show that there are more visitors in high rainfall years. This peaked in 1990 and the numbers have fallen away since and Michael asks if this is due to the aspirations of hikers who now may prefer the shorter walks and a comfortable bed. 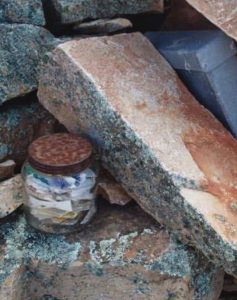 “Us-Hikers” are well represented in the Vulkathunha Gammons logbooks throughout the sixties, seventies, eighties and nineties and this group consisted of secondary school boys and girls plus scout groups. These consistent trips perhaps opened up extended hiking for girls who prior to the 60’s were treated differently to boys. The aim was to build confidence and to inspire these young men and women with a “can do” attitude. In particular, this was borne out by Diana Patterson, the first woman to lead an Antarctic Expedition. In her book, “The Ice Beneath my Feet: My Year in Antarctica”. She attributed her drive and passion for the environment to her early years with “Us Hikers” in the late sixties.

Other notable entries are from Warren Bonython, Adrian Heard, John and Monica Chapman all of whom have written books on the area so if you dig deep enough into these logbooks you can unearth a great deal and I have met, via email, so many interesting people who have contributed so much to hiking in this state, it is quite humbling. 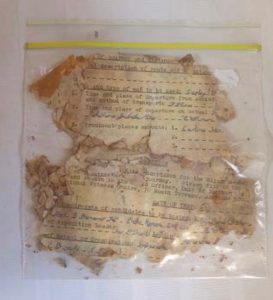 Sometimes the information is recorded in exercise books held in practical waterproof containers that are custom made or in old “ammo” boxes and sometimes it is just scraps of paper in an old Vegemite jar. Not practical, as the old tin lids rust through and the documents are lost forever. An ABW (Adelaide Bushwalkers) group salvaged such documents from Mt Stuart in 2014 and now photocopied and can be viewed on the website (thanks to Jeremy).

An old tablet tin containing logs for Kankana Peak was found in May 2020, 500M below Iralbo Peak by Dr Mark Lethbridge of “Echoknowledge”. The last entry was 2006, this may have been removed on purpose by some “purists” who believe Logbooks and cairns desecrate the pristine wilderness or it could have made its way down by not being secured properly. What a chance find after 14 years! This log is now held in ABW archives.
The problem with statistic collection is that it is variable because trail counters include walkers plus bikes and horses and log book entries depend on whether the hiker actually makes an entry. It has been suggested (from decades of asking) that only about half of the hikers make entries and this is because many don’t write up subsequent visits, or they don’t see the logbook, there is no pen or they just don’t bother.
In my view, if we are to pursue statistics we need to persuade hikers to make entries in the logbooks. Anecdotal evidence shows that the number of extended hikes are diminishing in the Northern Flinders which could mean that people just don’t know of the myriad of places to do extended walks. One such log entry requested that a list of all the summit logs be listed inside the front cover so they could plan more walks.I hope that person reads this article because the list is at the end!

There is a protocol for filling in the logbooks but this is often ignored as there has been a lot of graffiti and vandalism of these historic records. An example of this involves the Mt Brown logbook where signed pages were torn out to light a fire. In addition, pages were missing from an entry made in the late seventies by Fos Williams (coach) and the entire Port Adelaide football Club, someone had selfishly souvenired the signatures. Fos was born in Quorn and for training he ran his team up to Mt Brown and back before there was even a walking trail. 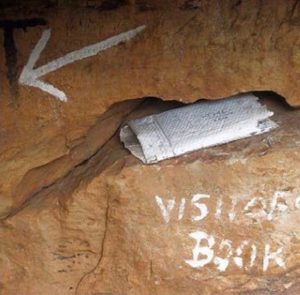 These logbooks or containers are installed by various groups
visiting a summit mostly to say “I’ve been here” and then random responsible people collect them when full or damaged and archive them in various locations unbeknown to the hikers who left their precious comments and who often revisit the location and try to find their old entry. To locate these books requires calling on old memories if you know who to contact in the first place, ABW have many logbooks (11) placed on summits throughout the Flinders Ranges and they maintain them and archive the old ones within the club.
From other sources I believe Arkaroola may hold old logs from Freeling Heights, a member of Walking Trails Support Group holds the logs from the Quorn area, Angorigina Station may have old logbooks from Patawarta Hill and sometimes these books are handed to the local park ranger and occasionally they find their way to the care of ABW. The State Library of South Australia (SLSA) holds an old log from Rover Rock Hole and is available on Microfiche (18th May 1970 to 11 May 1998 (microfilm D7431(L), State Library of S.A.) 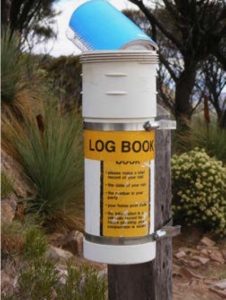 As the caretakers of these items change there is potential for this history to be lost over time and it is the general consensus that it would be wise to have them stored in one location such as the SLSA where they can be put on microfilm (or digitized) and be accessible to the general public. SLSA will only take logbooks in reasonable condition and some responsible body has to hand over the rights of that document. The CEO of Walking SA has agreed to facilitate the collection of logbooks to hand on to SLSA. In the meantime it would appear that Adelaide Bushwalkers have the most logbooks in place and presently have their own archives with digital copies of these plus others on their website.

Not only are logbooks historical documents but together with the numbers from various trail counters they show trends in the numbers visiting an area on which we can base our policy and plans to “Keep More People Walking More Often”.

Trail counters are installed by various councils, trail builders and the Department of Environment and Water (DEW) and they monitor numbers for their own purposes but they also pass this information
on to Walking SA who have seen a statewide trend that walking numbers have more than doubled since the Covid 19 initial “lock down”. The challenge now is to keep this trend going and next time you bag a peak, look for a logbook and make an entry, that small deed may be very important in the future (courtesy Jeremy Carter) 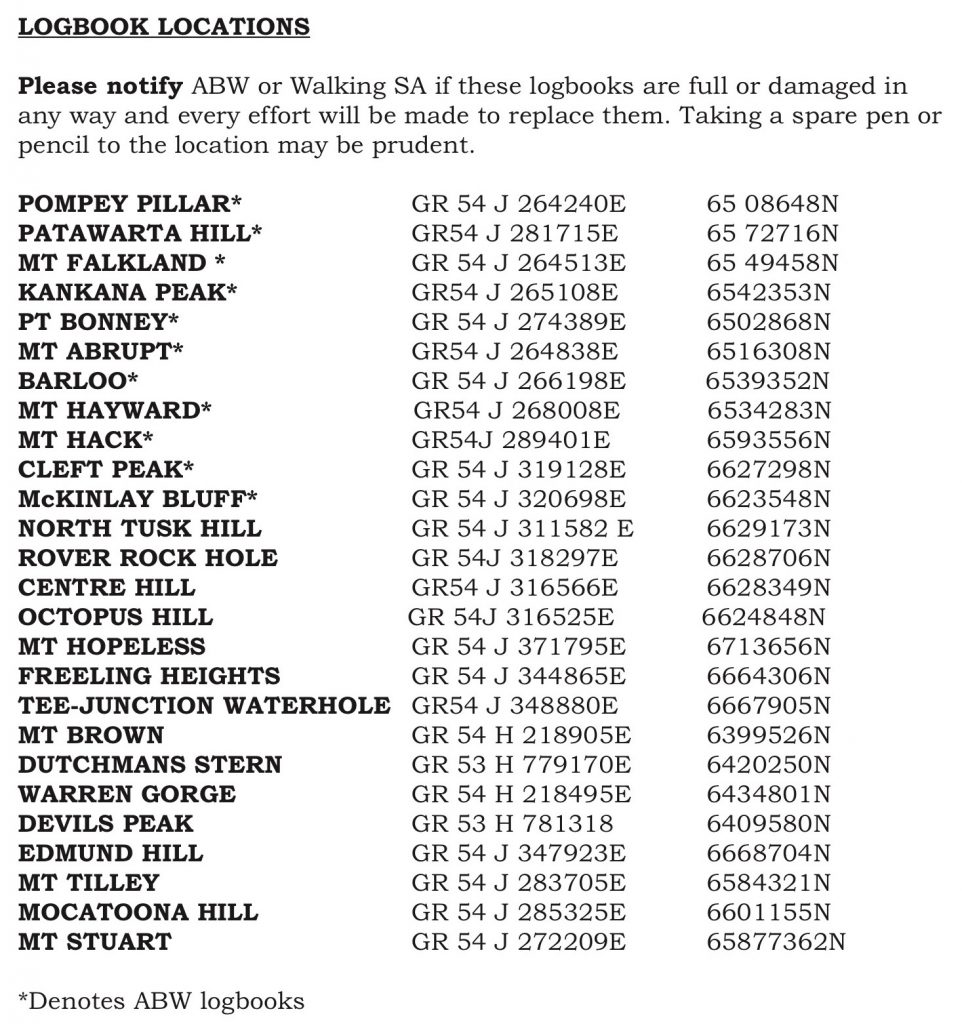 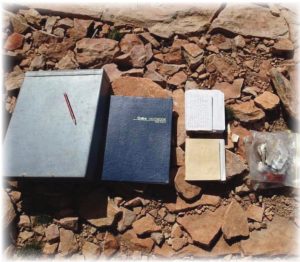