The Fraser Island Great Walk, May 2016 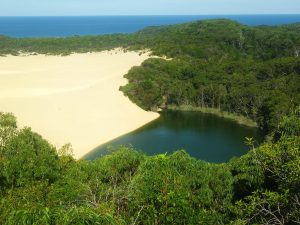 During May of 2016, eight walkers from ABW walked the Fraser Island Great Walk. The walkers were Alex Donald, Alex Potoczky, Bernie Koszegi, Nino Fioretti, Trevor May, Colin Kinnaird, Lorraine Thomas and me.

The Fraser Island Great Walk is one of several walks in Queensland designated as ‘great walks’. It appears that they have pinched the New Zealand terminology. All the Great Walks seem to be well set up and have extensive information available. Fraser Island is the world’s largest sand island and home to the purest strain of dingoes. We tackled the walk north to south, which is the reverse of how it is described in the trail notes, but I think it proved to be a good way to do it.

The walk is around 90km in length but finishes at a point where you can’t get off the island without organising land based transport to the barge, so it necessitates a further 25km of walking with a camp along the way to get to the nearest barge to the mainland.

Our plan for the walk was: 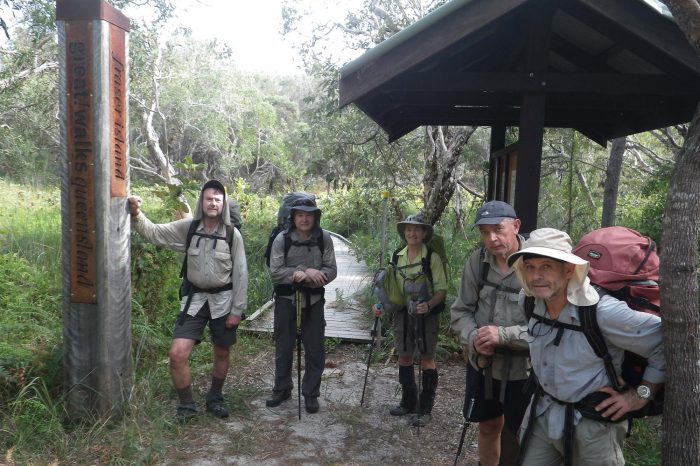 The group gathered in Hervey Bay before the walk with people arriving over the two days prior to the walk. The evening before, we met up at the bar at my accommodation for happy hour and then walked to a restaurant at the nearby marina for the customary pre-walk dinner. The daytime temperature had been around 27° (as were most days) and the evening mild but the locals thought it cool so we were surprised to find the outside gas heaters on at the restaurant.

The walk went as per the plan and here are my recollections of each day; 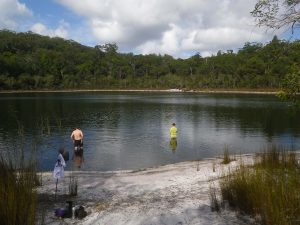 It was quite an involved and lengthy process to get to the start of the walk. First a bus to the barge then the barge to Fraser Island and finally a two hour cramped and bouncy 4WD taxi trip (nine people in a Land Cruiser) to the trail head. This meant we started walking just before lunch at the warmest part of the day and it was quite humid. The walk started uphill and in fact was the highest climb of the entire walk, a height gain of only 200m but quite taxing at the start. We were all quite glad to stop after 30 or 40 minutes for lunch before finishing mid-afternoon. The first campsite was very pleasant amongst the rainforest and was a couple of hundred metres from the lake where I think everyone went for a refreshing afternoon swim. The campsites were spaced well apart and were set up as either singles or doubles as determined by the size of the food storage box. The trail notes had said to bring food in sturdy rat-proof plastic containers as the campsite boxes were to keep dingoes out, not rodents, but the boxes at this camp were solid sheet metal. 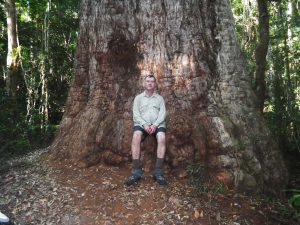 Cooler walking as we started at 8:30am and the trail was well shaded by the rainforest. We had morning tea at Petries camp historical site a few hundred metres off the main trail.
A pleasant enough spot but not much there. Although it was walking on sand, the trail was firm and the walking easy, which translated into a fast pace. As we got closer to the Valley of the Giants camp the trees got ever larger, hence the name. We made camp for lunch. No lake at this camp so for part of the afternoon we did a side trip to the Giant Tallowwood, which was indeed a giant of a tree. Because all the camps were in the forest, which filtered out a lot of the sunlight, it started to get quite dull after 4pm. It was all I could do to stop people starting dinner then. Rules had to be enforced, no dinner until 5:30pm. Even then it was all I could so to keep people up after 6:30pm and it wasn’t even cold (people blamed the mossies but I didn’t think they were bad). Colin, Bernie and I generally were the night owls staying up until 8pm!!

Off again through the rain forest on a firm sandy trail. The giants now diminishing as we move away from the Valley of the Giants but still significant rainforest. A side trip this
morning to the Badjala sandblow. This involved a steep scramble up loose sand and provided spectacular views across the sandblow to the sea and in the other direction across endless rainforest. There are not many views through the rainforest so these sandblows present a welcome change. The day’s walk finished with quite a tough climbing section up to the Lake Wabby campsite. The lake is a bit over 1 km from camp and unfortunately was closed due to a troublesome dingo, so no swim today either.

The end of this day will mark half way though so we are heading to Central Station campsite where we will spend two nights. This is the area where we expected to encounter the most tourists, and that did prove to be the case, but most were day visitors and those who were camping were well separated from the walkers camp, so still a quiet camp. This campsite provided the luxury of hot showers for $2 and rubbish skips. The rubbish skips took a bit to find, being at the far end of the 4WD camping area. (Why would you place them near the walkers camp??). This campsite had a central dingo-proof food cage rather than the separate boxes and proved to be the only site like this and therefore the only one where we needed our rat-proof containers. If we had camped at Lake McKenzie instead I think we could have saved some weight and not needed the rat- proof containers.

Having not had a swim since day 1, this was the day to catch up. We had a day walk to Lake McKenzie with a stop on the way there and back at the smaller Basin Lake. Lake McKenzie was beautiful but very popular with day visitors. We had a swim and morning tea and then headed back to Basin Lake for lunch and another swim. We had Basin Lake to ourselves except for a couple of visitors who dropped in for a short time near the end of our stay.

This day was a four lake day; Lake Jennings, Lake Birrabeen, Lake Benaroon and finally camp at Lake Boomanjin. This camp was a bit different from the others being a bit more open and a bit higher and therefore not as dark as early. It also had a bit of a view and an even better view was had from the day visitor picnic area where we had dinner, there being no visitors then. The lake was also great for a swim even if the colour of tea due to the tannin from the vegetation.

This was the day we finished the ‘Great Walk’ at the Dilli Village trail head. On the way there was another side scramble up Wong Sandblow for more great views. The entire walk meanders through the centre of the island so we had not been on the beach since day 1. Dilli Village is on the coast so we had a long morning tea watching the surf from the dunes near Dilli Village. Then came the worst part of the
walk: a hot 10km stretch through soft sand to Jabiru Swamp campsite. This was the smallest campsite (officially only caters for six people) and has no facilities so I was fearing it may
not be very nice, but as it turned out it was still a great spot. We had been told by a passing walker that they had had a dingo in camp the night before. Having not seen one we were keen to see one but also a bit apprehensive. As it turned out it was a no-show.

We were all worried that today’s 15km was going to be like the last 10 of the day before but fortunately it was OK. It was cooler, being the morning, and the track, while not as firm as most of the walk had been, was firmer than the day before and quite good. We zipped along at 5km/hour and finished before lunch. The decision as to where to have lunch, here or on the mainland, was made for us as when
we emerged from the forest onto the beach the barge was there. It was leaving but having seen us and a 4WD coming along the beach it came back for us. We had quite a wait at Inskip for our bus transfer so we had lunch and some had a swim. We arrived back at Hervey Bay in time for a shower before meeting at 5pm for happy hour and dinner. An appropriate post-walk celebration was had. To Sum Up I really enjoyed this walk. Perfect weather, a great group of people, very nice campsites and a great walk. If you are after a rugged tough walk with lots of peak bagging then this one isn’t for you, but if walking on pleasant tracks through beautiful rainforest and swimming in freshwater lakes surrounded by forest appeals to you then this is the walk. Apart from days 4 and 5 when we were camped near the tourist hot spots we saw very few people. We only saw 10 other walkers over the eight days and had most of the campsites to ourselves.