Water Sources for Bushwalking in the Northern Flinders Ranges

ABW is currently in the process of surveying the water resources of potential interest to bushwalkers in the northern Flinders Ranges (north of Parachilna-Blinman-Wirrealpa) with the hope that it will make it easier to plan multi-day walks in the region especially in years of average rainfall or lower. The area of interest is covered on all or part of twelve 1:50,000 topographic series maps. In addition to the areas very popular with bushwalkers, the survey also covers adjacent less popular areas of lower elevation but which in fact, offer interesting walking. Because of its wide scope, over 250 potential sources of water are included in the survey and it is planned that the information will be tabled and placed on the ABW website later next year. It is also hoped that the site will continue to be updated as new information becomes available.

This article is a follow-up to an earlier one that set out the background and aims of the project (Tandanya Vol. 44.1, Autumn 2014) Information for the survey has been gained by on-site visits during bushwalks (and this is particularly useful for getting information about the more remote sites) and also from talking to the land owners. Progress made to date includes:

Maps can contain mistakes and we have been able to correct several errors pertaining to water sources except in cases where we could not find what we were looking for (e.g. Alieroona Spring on Pinda Springs). The most recent example of this is an unnamed well (GR 391611) on the headwaters of Yudnamutana Creek and that, according to the map, lies 350 m west of Wheal Frost Mine on Arkaroola. Despite a lengthy search by three of us, no well was found within 0.5 km of the map location.

Whether or not waterholes and springs contain water during the time of a planned visit is probably the prime interest of bushwalkers going to walk anywhere in this region and the likelihood of any particular site having water can often be difficult to know in advance. The Gammons are unique for being the only area that has a stated likelihood of each of its waterholes containing water. This is thanks to the extensive walking in the area and research over many years by Ray Sinclair-Wood of Quorn and his estimates are given in Adrian Heard’s long out of date (1990) ‘A Walking Guide to the Northern Flinders Ranges’. The ideal would be to establish correlations between the water status of any named waterhole and rainfall over the months preceding the walk (summer and onwards). That may be possible with the existing data for the Gammon and this may it is worth following up.

Making broad statements about the reliability of waterholes from what presents at a single visit can be difficult depending on the circumstances. Visits in wet years for example will tell you nothing about the likelihood of water at the same site in drier years. In this respect, it was fortuitous that rain, but not too much of it, fell over much of the region 4-6 weeks prior to our two later trips of this year as this resulted in many of the water courses having transient pools. This meant that, where named springs and waterholes were found to be dry, then it seems reasonable to conclude that they no longer flow or exist. Springs and waterholes falling into this category include Amberrona Spring and Warrancurrayana Water on Umberatana Station and Gordon Springs on Arkaroola. The spring at Hanigans Gap (Moolooloo) was found to be dry in three different and recent rainfall years and this provides good evidence that this spring also no longer functions.

After coming across a couple of dry springs in the Umberatana hills, it was a big surprise to find that Weedna Spring, sited at the head of a minor creek that flows north from the dry Weedna Plains, produced a 400 m long stream that was running in places. The presence of fully submerged water plants in deeper pools suggests that the spring flows permanently. 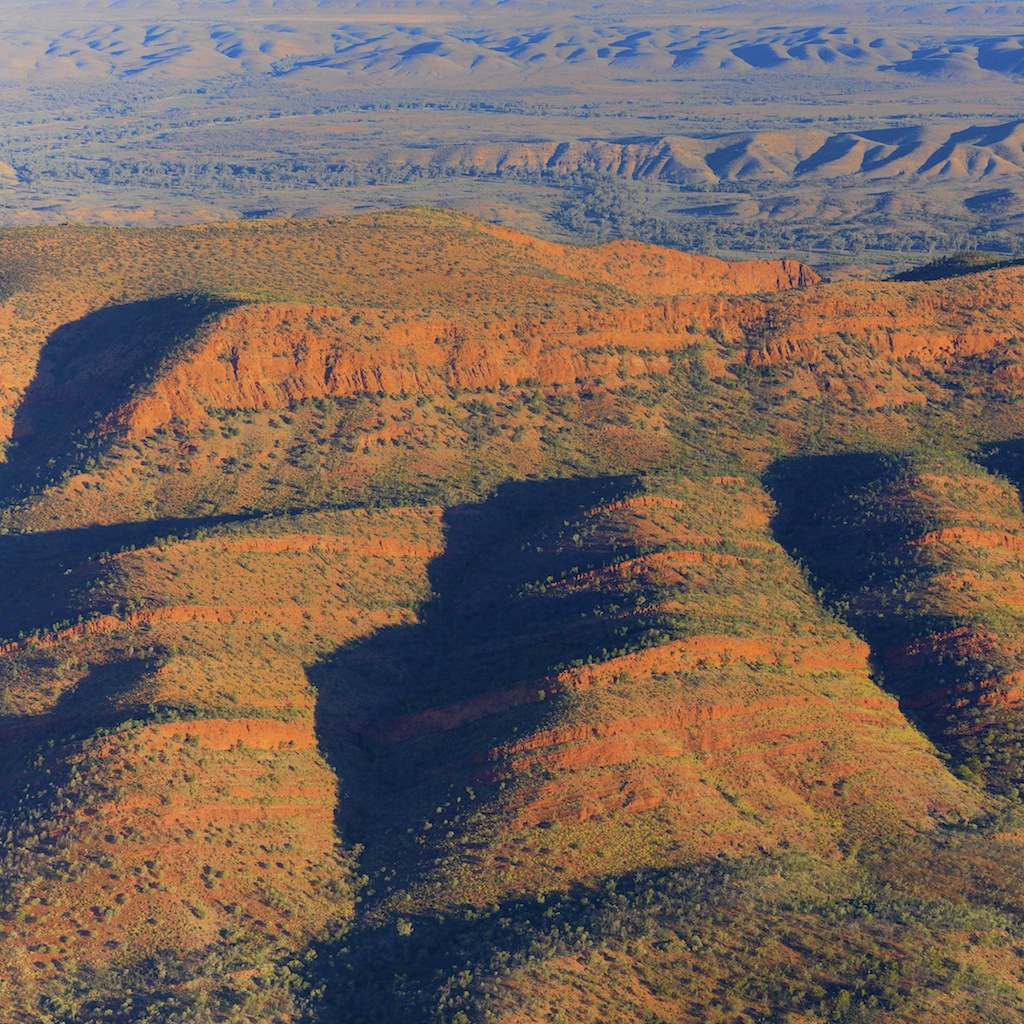 A further aspect of water resources but one not so often encountered, is salty water. Reg Sprigg recorded the salt content of some of Arkaroola’s water-holes over many years and found for example that Bolla Bollana Spring’s salinity varied greatly according to rainfall. During our visit there this year, Rob Jung found that it contained 4300 mg/L salts which exceeds the human tolerance limit (3000 mg/L). This is near Sprigg’s highest value for that spring (4400 mg/L) although he found much higher concentrations in some nearby springs during drought. 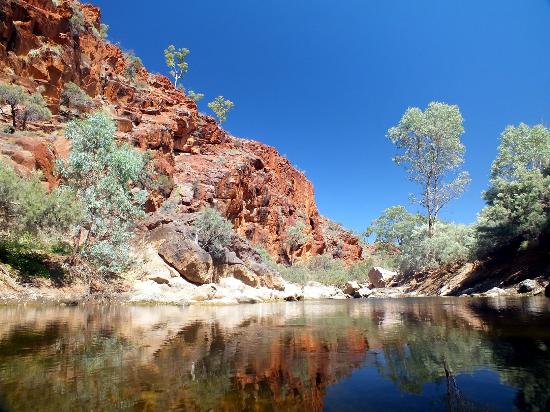 The project has turned up some surprising results and perhaps none more-so than for Mocatoona Spring on Angepena Station. This permanent spring is marked on the map (GR 849030) as being located at the junction of two water courses and while this once was the case, it no longer is. The original spring was used by a miner who lived on site and worked a mine during the cooler months of each year but he returned one autumn to find the spring had gone dry. He searched about and eventually found water flowing from the base of a large gum tree 400 m away (GR 851 027) and where it previously hadn’t. It can now be seen in the new location flowing by pipe to an old stone tank. This is a case of the map being not so much wrong, but out of date. 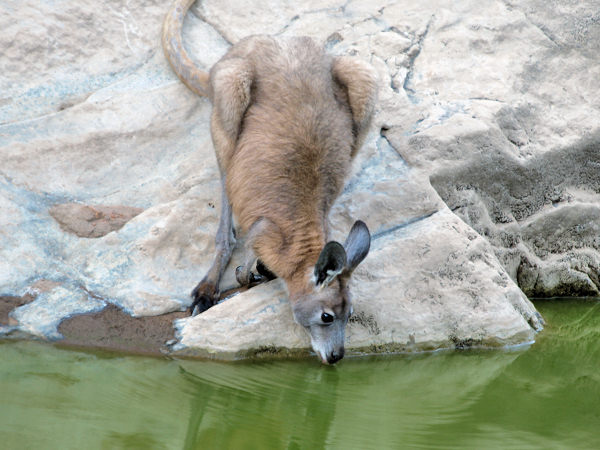 Named waterholes play an essential part of bushwalking trips in the northern Flinders and, just to add what I think is an interesting aside, an interstate companion once commented that it was the first time he had ever walked in a place where waterholes had names. That was three years ago in the Gammons and he expressed surprise and a certain amount of pleasure when he said this and it did impress on me another way in which the Flinders are special.

Water is essential heavy stuff and carrying significantly more than you generally end up needing is not only wearying but is also poor practice if, by better trusting your informed judgement, much of it could have been avoided. It is hoped that the data base, once it comes online, will go at least some way to help resolve this issue and make it easier to plan walks in the region.

I would like to acknowledge the efforts of two people who have made a tremendous contribution to this project and these are Rob Jung of Sydney-based Coast and Mountain Bushwalkers and Jim Happ of Maroondah Bushwalking Club, Victoria and formerly of Port Pirie. I have had the pleasure of walking with Rob in the Flinders but unfortunately, Jim has now finished with extended walks and carrying big loads. Thanks also to John Callinan and Bob Geary of ABW who contributed data on Warraweena and Mt Hack. I would also like to thank the land owners and managers who have all shown interest and been welcoming. They have provided much useful information for the project.