Something extra for bushwalks (Bellfruit tree) 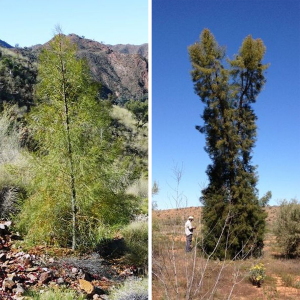 The recreational activity of bushwalking sees people walking into remote wilderness areas. This is done for exercise, the experience of ‘getting away from it all’ and other reasons.

Bushwalkers see things that will only be seen by those prepared to walk away from a vehicle carrying all they need to stay in good shape for days while moving on foot through rugged and remote terrain. This item is about the possibility of adding to the recreational bushwalking experience without detracting from it.

The attraction of wilderness areas is that they are, in the imagination at least, as they were centuries ago. However, the reality is that most ‘wilderness’ is different from what it was only years or decades, let alone centuries, ago.

These changes are being monitored as well as can be expected, given that it is very hard to make money out of a wilderness without changing it into something else. There is some potential for bushwalkers to contribute to the monitoring of wilderness. This might happen as follows.

The leader and members of a bushwalking group might be prepared ‘to keep their eyes open’ for certain features of a wilderness or they might even be prepared to modify their walk so that the chance of making some particular observation is increased. This leader and her/ his companions would need to know what observations are indicators of the state of the wilderness and would want to know that their observations are going to be recorded where they have the potential to contribute to the preservation of wilderness. They will usually need someone to assist them in this. 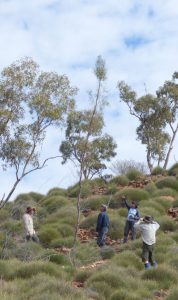 Adoration for a Bellfruit tree on the Mawson Plateau

One person who is in a position to do this is a Mr Robert Brandle, an ecologist with Natural Resources, SA Arid Lands, which includes the National Parks in this region. Part of his responsibilities include advising the department on how our natural resources and species of conservation concern are tracking, and whether current management is being effective.

Robert thinks it is possible that useful observations in remote areas could be made by bushwalking groups visiting those areas, and he is prepared to have a go at assisting groups that are interested in collecting such observations. His assistance would usually be in the form of information provided via email to interested bushwalking leaders who contacted him. Usually the location for the walk would be sufficient to tell him if useful observations might be made there by a bushwalking group and what information he could provide to assist.

I contacted Robert about this sort of variation to a bushwalk in anticipation of leading an ABW group into Mainwater Pound in the Vulkathunha-Gammon Ranges in June. It turned out that rain-affected roads prevented us from getting to the starting point for the walk but, for the purposes of this article, it is worth outlining what resulted from my approach to Robert. His suggestion was that members of my group be on the lookout (without going out of our way) for specimens of the slender bellfruit tree, yellow-footed rock wallabies (YFRWs), echidnas and the scats of these animals. Robert supplied photographs and written information about all these things.

I was confident of recognizing YFRWs, echidnas and echidna scats but not YFRW scats or a slender bellfruit tree. Robert had supplied photographs of the YFRW scats and the tree. His requirement of my group was that we should take photographs of animals (where they stayed in sight long enough) or scats (which were not likely to move anywhere unassisted) and of any slender bellfruit trees we saw. Photos had to have something in them to allow a good estimate of the dimensions of scats and trees. We were also expected to mark the position of every sighting using a GPS. With both a GPS and a digital camera being normal equipment for every bushwalking group these days Robert’s requirements would have been easy to meet had we got into Mainwater Pound (which we did not). 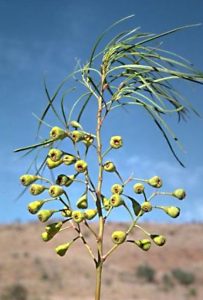 Distinctive fruit of the Bellfruit tree

It turned out that on a later walk on the Mawson Plateau I did see a slender bellfruit tree close up and many others on distant ridgelines. Their appearance closeup, and at a distance, is quite characteristic (see photos below) and I think in future I will be able to recognise them.

This slender bellfruit tree is thought to be extinct in New South Wales and had been in decline in South Australia until a few years ago, when there were several consecutive years of good rainfall in the north of the state. Robert thought that this rainfall might have produced a comeback by the tree and this is why he suggested I keep an eye out for it on my bushwalks.

If you are an ABW multi-day walk leader, or become one in future, I hope this article leads you to consider adding this conservation element to one or more of your walks. If it does, you can contact Robert Brandle at the e-mail address robert.brandle@sa.gov.au or talk to him on 8648 5373 or 0427 397 470.