What the Wily Weekend Walker is Wearing

“Thank you Mr Chairman for your very kind words of introduction and hello everyone. I’ll get started without further ado.

This is a frontways view of Bunyip Bluegum and his Uncle Wattleberry. At a glance you can see what a fine, round, splendid fellow…whoops sorry. Wrong meeting! One moment… There! Again, first slide please. 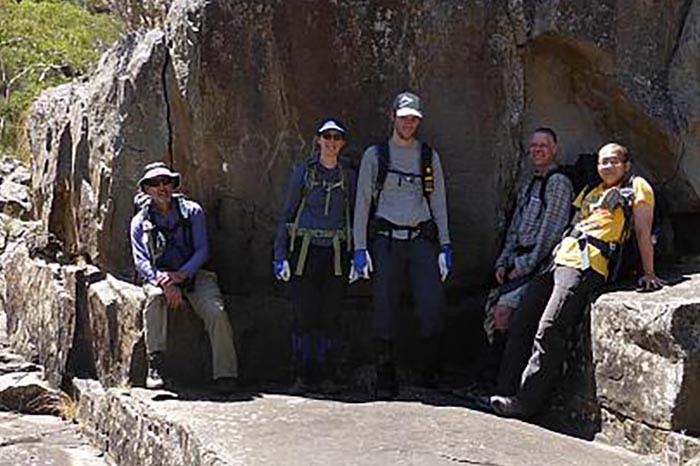 This is a front on view of the fine fellows (and I hope the ladies won’t mind being included in that term) who accompanied me on a jaunty little outing down the River Onkaparinga during a recent weekend in March. Their smiling faces, I’m sure you’ll agree, could hardly be said to disguise the pleasure the whole thing proved to be for all of us. We were six in number but only five are shown here because one of us (yours truly, needless to say) is taking the photo. Fine as that photo may be however, it doesn’t well portray what I really wish to speak to you about tonight and that is… next slide please… 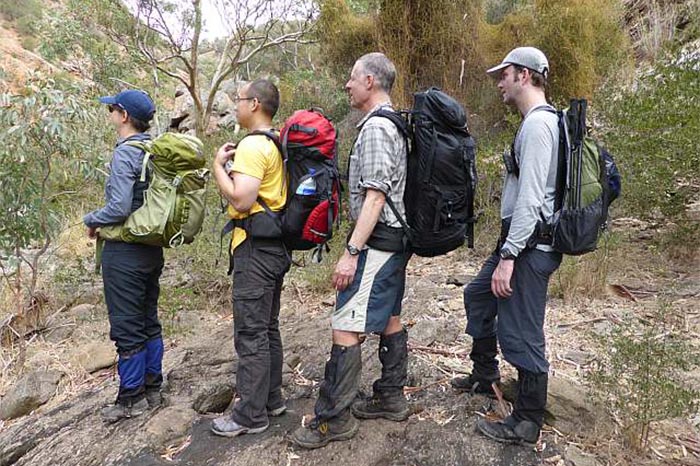 …and that is rucksacks, both their style and loading.

Looked at sideways, the photo confirms what a splendid bunch of companions they are. Everyone so relaxed and with arms at rest in various positions but it’s the rucksacks we are more interested in tonight and we’ll consider them in turn starting from the left.

We begin with Kylie ….Oh and you’ll notice that there are now only five in the party (my earlier observation still applies) because we are now one fewer in number. Richard self-diagnosed a leg injury, self-exited from the gorge and with his family co-opted to help with the evacuation, was taken to hospital for stitches (ten in number he later informed us) while the rest of us pushed on, somewhat demoralized by his departure but not defeated. So back to the rucksacks and first, we have Kylie and if I didn’t have my glasses on, I would swear that she has a koala on her back. The rucksack’s styling is certainly individual and it appears to be giving its bearer a loving sort of hug. It’s the type of pack that would be ideal, I think, for any walker feeling perhaps a bit lonely and in need of some TLC though I’m sure that doesn’t apply to our model. (Laughs) The pack is a soothing eucalyptus green in colour harmonizing with the Australian bush but my fear is that, and this is just a personal thing, if you were to put it down somewhere and wonder off for a while, it may be hard to find on your return. My own preference is for something more in the screaming orange line.

Next we come to Luo. This was Luo’s first overnight walk with the club and you’ll agree that he’s kitted out well and in a style that very much suits him. As prospective walks leader, I did request that people coming on the trip ‘try to pack light’ and Luo took this advice to heart but found that the only thing he could lighten was the food so he limited it to a packet of Jatz biscuits as his sole victual for the weekend! While this makes a great story and one I love to tell, I just wish he didn’t do it on ‘my’ trip as I’m afraid that it reflected rather poorly on someone being assessed for his leadership qualities.

Trevor is next and his pack astounded me as soon as I saw it. Trevor is as aware as I am that there is an unspoken competition between the two of us and one that’s been ongoing for some years now, about who has the lighter pack. The surreptitious lifting of the other’s pack at the start of a trip though it tends to be done more openly now and usually with an exchange of banter.

So why the big pack Trevor? One that’s the size of your usual seven day pack? As it turned out, his pack was in fact surprisingly light – of course I lifted it – and I suspect that it contained his air mattress only half deflated. Deliberately. It was a tease I’m sure and just his way of poking fun at my ‘try to pack light’ directive.

Last but not least – though certainly his pack is, we have Ryan. Ryan’s pack was truly something to behold. It’s in the first class all on its own and it puts mine, and Trevor’s for that matter if he doesn’t mind me saying so (short laugh) in the third! I won’t go into the details of Ryan’s pack except to say you won’t find one like it in a shop near you. The same probably also applies to his tent, his sleeping bag and for all I know, his food. He seemed to be happy enough with his nano approach to gear so perhaps he needs nothing more or perhaps he’s afraid that if he did load more stuff, the pack would disintegrate under the weight! (Laughs with audience joining in. Except Ryan.) 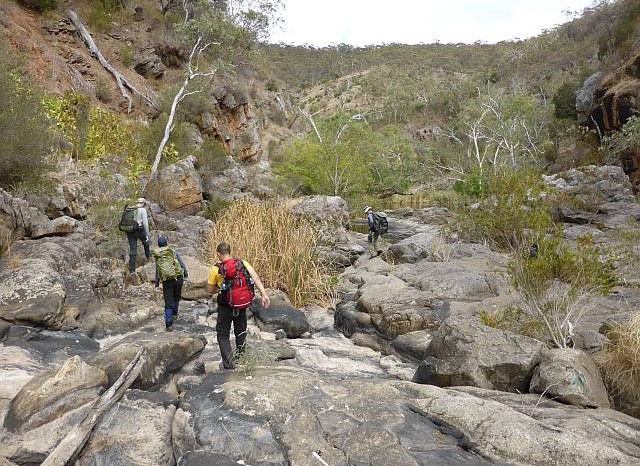 by saying farewell to our merry walkers as they wend their unweary way westward down the wiver. It’s been a pleasure talking to you all and I hope you enjoyed it. I shall now hand back to the chair. Thankyou Mr Chairman.”
“Zzzzzz Zzz”
“Mr Chairman!”