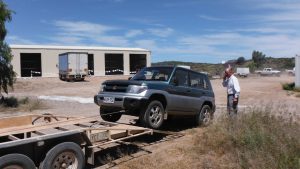 Ray watches his vehicle being loaded on a trailer at Owieandana

There is a familiar saying ‘if something can go wrong, eventually it will go wrong’. As Mark has said in his water tanks article I went with him last October to the Northern Flinders so that some final additions could be made to the two water tanks that he and other ABW members had installed there a bit earlier in the year.

We were travelling in my vehicle, a Mitsubishi Pajero Io. I purchased this vehicle new in 2000 and have made many trips in it to remote locations in the Northern Flinders. The vehicle has always been well maintained and had proven to be both reliable and nimble at negotiating rough station tracks. On this trip though the vehicle broke down between the Yankaninna and Idninha ruins about 30 minutes’ drive from the water tank located at Mainwater Well.

It was soon apparent that we would be going no further towards Mainwater Well or the other tank that was another 40 km north at Yudnamutana. It seemed that we had come a long way but were going to accomplish no part of what we had come to do. This setback occurred about 5 p.m. and we were about 25 km from the nearest assistance. There was no mobile phone coverage. Our immediate problem was to get ourselves, and the vehicle, back to Copley which was 90km to the west.

For a couple of years now I have been carrying a satellite phone with me on my trips. Up until the vehicle breakdown I had been testing the coverage that the phone provides and making the odd call home. Now we had a situation where the phone’s usefulness would be tested in a meaningful way and it passed with flying colours.

I was quite quickly able to make a contact with the RAA and the operator set up a telephone conference with its agent at Copley, David Cooke at Cooke’s Outback Motors. David advised that he would be able to get his recovery team out to us next morning and so Mark and I were able to relax somewhat and get organised for the night.

First thing in the morning I rang David and learned that his recovery team was on its way. We settled down in the shade to wait. The phone was left switched on so that we could be contacted if necessary and, in due course, a vehicle with two men in it appeared.

The previous evening the car had been immovable and we had not been able to get it into gear. But one member of the recovery team was able to get the car moving albeit with some disturbing noises being heard as the clutch was operated. I agreed to the car being driven (rather than towed) 25 km to where it was put on board a trailer and taken to Copley. A brief examination of the vehicle by David Cooke at Copley was enough for him to decide there was something wrong with it that he could not fix and that would prevent it from being driven safely back to Adelaide. From Copley it was brought back to Adelaide by the RAA.

My main reason for getting a satellite phone was to assist in the situation of being on a walk where someone had a serious injury or illness. I have always carried a personal locator beacon but it seemed to me to have the weaknesses of being only for use in life-threatening situations and even when it was set off you had no way of knowing if the beacon’s signal had been picked up and was being acted on. There are personal locator devices that allow for some two-way communication but after the experience of using a satellite phone in a situation where the effectiveness of two-way communication mattered I am satisfied that you cannot do better than a satellite phone.

The other positive part of this episode was the role played by the RAA. My Road service cover is Premium, the highest level available, and this, like the satellite phone, turned out to be worth the expense. Premium cover saw the RAA pay three nights’ accommodation for Mark and me at Copley, two days’ vehicle hire that we used to do the job we had come North to do, and bus fares home. All these things were arranged by the RAA without me having to do anything. So, from it looking like we were going to be flat out getting ourselves out of trouble, let alone do the job we needed to, we ended up doing both.

While waiting for the mechanics to decide if they could repair the vehicle we hired another 4WD and headed off to carry out the work on the water tanks that we had come to do. The updates were achieved quickly and with great joy we verified that the Mainwater Well tank had 700 litres of water in its 1,000 litre tank and the Yudnamutana tank had 900 litres. The tanks were performing perfectly.

There was a significant cost to me personally for getting my vehicle back to Adelaide because it had to be recovered from a point beyond where 2WD access ended. But I have always been aware of this and consider myself fortunate that the breakdown did not occur at Yudnamutana. The cost to ABW of getting the tanks finished off ended up being no more than would have been the case if the trip had gone as expected.